KKE leader Koutsoumbas destroys Tsipras during Parliamentary debate: "You should be ashamed, you are the stooges of the U.S" 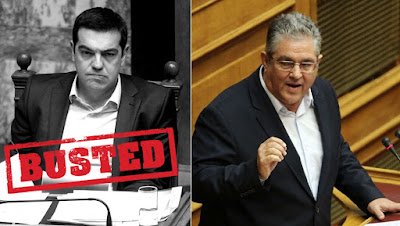 During a fierce debate in the Greek Parliament regarding the Prespes Agreement (name deal) on Thursday late night, the General Secretary of the Communist Party of Greece (KKE) Dimitris Koutsoumbas responded to the hideous provocations by Prime Minister Alexis Tsipras.

In an effort to defend his pro-imperialist foreign policy and more specifically the unacceptable Prespes deal which bears the signature of NATO, Tsipras unleashed outrageous slanders against the KKE. He even resorted to provocative references to heroic Slav-Macedonian fighters of the Communist-backed 1946-1949 Democratic Army of Greece in order to present the name agreement as an... anti-imperialist achievement!


Prime Minister Tsipras, like many of his cabinet's members, shamelessly attacked the KKE because it stands firmly against the pro-imperialist Prespes name deal and exposes the actual character of SYRIZA's policy.

The Communist Party's General Secretary Dimitris Koutsoumbas slammed the anti-KKE slanders of Tsipras, saying to the Prime Minister: "You should be ashamed. Shame on you. You have the nerve to talk about the heroes of the KKE who were murdered by american weapons. Leave out of the discussion our honored heroes. You are the stooges of the U.S!".

Destroying the governmental "narrative" of Alexis Tsipras and SYRIZA, Dimitris Koutsoumbas pointed out: "The agreement you signed Mr Tsipras is a NATO -inspired agreement", refering to the article 2 of the Prespes Accord where Greece guarantees that will support the membership of FYROM in two imperialist organizations, NATO and the EU.

The KKE Secretary spoke about the character of the Tsipras-Zaev agreement as a tool for the deepening of NATO-US involvement in the Balkans. He underlined that nationalism and irredentism has not any relation with the genuine patriotism of the people, adding that the cosmopolitalism of the big capital and its governments isn't related whatsoever to internationalism and people's friendship. 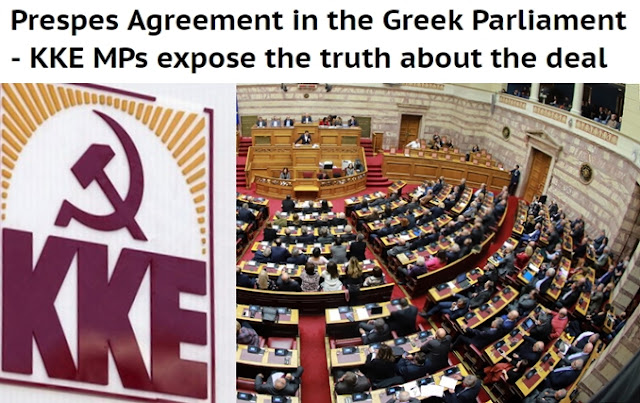