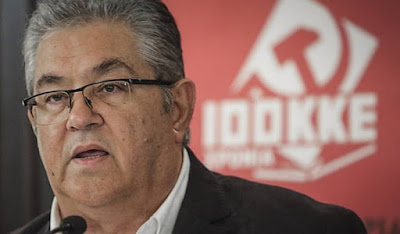 “The justified indignation and dissatisfaction must be transformed into creativity and must be expressed through struggles, counter-attack and social alliance against the dipole, the monopolies and capitalist, with a powerful KKE everywhere” said the General Secretary of the CC of the Communist Party of Greece (KKE) Dimitris Koutsoumbas during an interview on 24/7 radio.

When asked whether the government will be politically legitimate after a possible departure of ANEL from the governmental alliance, Koutsoumbas said that “a government can exist event without the required formal majority. It is certainly a political issue and the government itself has to deal with it”.


The KKE General Secretary also said that he does not share the government's ultra-optimism which, as he underlined, “is based neither in realistic nor in objective facts”.

As he explained “the capitalist recovery that the government is expecting is obviously very weak, we do not have a substantial recovery or a recovery in the income of the majority of the Greek people in 2019 and, of course, we can't even talk about a recovery of the enormous economic losses that the people had during the last decade”.

The Communist Party leader added that “all anti-people memorandum laws remain in force” while “the country is under constant supervision”. All these, Dimitris Koutsoumbas said, are taking place within “a situation where we have a significant sharpening of the contradictions within the EU, the Eurozone, with centrifugal tendencies, and these are always accompanies by the intensification of authoritarianism, anti-communism, against people's rights and liberties”.

Koutsoumbas talked about the dangers that exist in the region, due to the geopolitical games between imperialist centers as well as due to the fact that the Tsipras' government has transformed Greece into a huge US-NATO military base. The General Secretary underlined that the KKE will vote against the “Prespes Agreement” because FYROM's membership in NATO is a component and a condition of the agreement.

Regarding the upcoming local and EU elections next May, Dimitris Koutsoumbas said that the KKE's goal is quite high. “We clearly say to the Greek people to avoid searching for differences between the various parties of the establishment- the current governmental party of SYRIZA, New Democracy, PASOK or others who are defined by them – but the people themselves to make the real difference with a strong KKE in all (electoral) battles, in the labor centers-federations' elections, in the municipal, regional and European elections on May 26th, as well as in the general elections”.