During their mobilizations more than 30,000 teachers signed in on picket lines across Los Angeles, more than 900 schools sites also participated while more than 10,000 parents, students and working people showed their solidarity with the teachers in struggle. The strikers not only have been struggling for a public education but they also intend to rebuke the anti-worker agenda which seeks to starve and privatize the schools.
The class-oriented WFTU family will firmly continue to support the strikers’ rightful demands against the anti-worker US bourgeois government’s agenda.
We call upon the US working class to join its voice with the strikers and to demonstrate their solidarity with the LA teachers in their struggle for a quality, public and free education system.
LA teachers are not alone!
Long live internationalist solidarity!
* * * 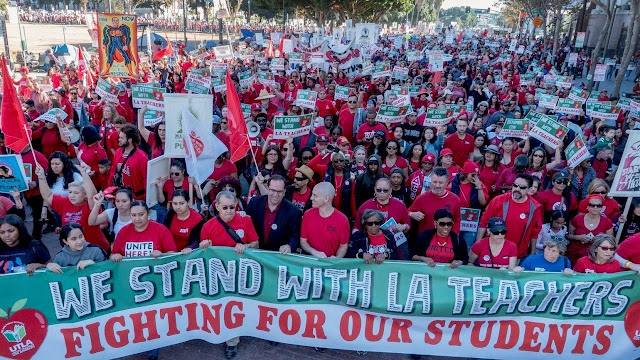 From Greece, the All Workers Militant Front (PAME), a member of the WFTU, expresses its solidarity to the great fight of teachers in the USA for better wages and better education for the children of the people.
The struggle of teachers in each country is both for their lives and for the future of the new generation. Anti-workers’ policies that lead teachers to poverty, flexible-temporary employment and unemployment also lead to the downgrading of the education for the children of workers, to the rise of class barriers to education, which becomes a privilege for the few. That is why the struggle for education in every country is a struggle of the whole working class.
This struggle is the best lesson for young students and the young generation and this lesson is precisely taught by teachers who teach them the principles of solidarity, friendship and struggle for the progress of humanity against a system that wants the of the children of the working class uneducated or semi-educated.
The most important lesson to the students is given by the teachers who are fighting.
PAME expresses its solidarity with the Los Angeles Teachers’ Strikes and supports their righteous demands.