KKE: Question to EU's Josep Borrell about the detained young communists in Ukraine 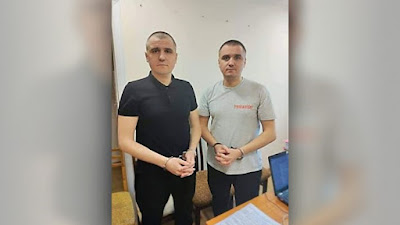 For more than 100 days, the First Secretary of the Leninist Communist Youth Union of Ukraine Mikhail Kononovich and his brother Aleksander, remain detained by the Ukrainian authorities. With a new question submitted to the EU High Commissioner Josep Borrell, the European Parliament Group of the Communist Party of Greece (KKE) denounces the unjust and arbitrary persecution and detention of the two young communists.
While the conflict in Ukraine is still raging with incalculable consequences for its people, the persecuted young communists are reportedly subject to unacceptable conditions of detention and blackmail. The two brothers have been appointed a lawyer by the Ukrainian authorities and now the dilemma they face is either to take responsibility for the accusations addressed to them under the 1st and 2nd part of Article 109 of the Criminal Code of Ukraine and to be sentenced to 10 years imprisonment, or to reject the accusations and remain in prison with life sentences! Utilizing its anti-communist laws and “emergency” decrees, but also the EU policy, the Ukrainian government escalates anti-communism and the persecution of communists.

Based on the above, the KKE MEP Lefteris Nikolaou-Alavanos submitted the following question to the Vice President of the EU Commission and High Representative for Foreign Affairs and Security Policy Josep Borrell:

"Taking into account the upgraded relations between the EU and Ukraine as a candidate member, what is his stance on the urgent demand for the immediate release of the young communist prisoners and what responsibility the EU undertakes concerning the great dangers towards their life and health, as well as to assure that they will not suffer further torture and blackmails?

Given the fact that the Commission is aware of the persecution and their unacceptable detention and is “closely following the case”, why it hasn't done the slightest thing to date for their immediate release?"