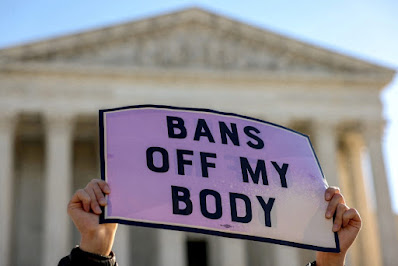 The PCUSA adds: "Women are the first oppressed social class, as per Engels, and the final frontier. In a country where maternity leave is scarce, child care is incredibly expensive, and food costs are skyrocketing working women are facing the heaviest blows due to the failure of the bourgeois regime. PCUSA vehemently stands for women's rights to free and accessible healthcare and defends whichever choices she makes for her health... We must stand up against the War on Working-Class Women wherever it arises”.

The Communist Party, USA (CPUSA) issued a statement titled “Today we mourn, tomorrow we organize” condemning the SCOTUS ruling. “The Supreme Court’s ruling in Dobbs v. Jackson Women’s Health Organization is a horrific setback for women, their partners, their families, and society overall”, the CPUSA points out among other things adding that “human rights in this country have never been universal, and the Dobbs decision highlights this fact even further”. The Communist Party, USA calls the people to “organize, everywhere, in communities, unions, schools, places of worship and workplaces”, with the aim to build an inclusive, broader, more militant movement which will defend the women's rights to abortion.

In a statement issued on June 11th, the Freedom Road Socialist Organization (FRSO) was calling the people to prepare “for mass action to keep abortion legal” and “defend women's and reproductive rights”: “We must organize and mobilize thousands to take to the streets and show the ruling class that if they try to take our reproductive rights away, we will take them back, by any means necessary” the FRSO communique was underlining.

“The time to fight back is now” reads a statement issued by the Party for Socialism and Liberation (PSL), calling the ruling of SCOTUS an “outrageous disregard for women's equality and bodily autonomy”. As the PSL stresses out, “the Supreme Court has time and again proven itself to be an enemy of the people and an enemy of democracy” and proclaims: “The fight is not over! We must continue to expose the hypocritical nature of the right-wing forces we face. We demand abortion rights on the basis of equality and bodily autonomy! The Supreme Court does not represent the majority of the country. We refuse to let nine unelected, unaccountable judges decide our fate.”