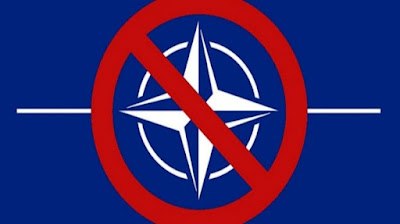 In a statement issued today, 9 June, the Secretariat of the European Communist Initiative stresses out:

"The Secretariat of the European Communist Initiative deplores and condemns the plans of the bourgeois classes and governments of Sweden and Finland to join NATO. This is a move that entangles the peoples of both countries, the whole of Scandinavia, and overall in great dangers and adventures.

The accession of Sweden and Finland to NATO is taking place in conditions of sharpened capitalist competition among the USA-the EU-NATO, Russia, and China in the midst of the imperialist conflict in Ukraine. It is dictated by the pursuit of the bourgeois classes of both countries to enhance their involvement in the imperialist plans and their share of the  looting of the peoples divided among the monopolies. It is accompanied by the skyrocketing of military armaments expenditures that are not connected with the defence of the countries but with the offensive NATO plans, the deployment of military forces and equipment to Ukraine, the plans to establish bases that serve as launching pads for war, and military exercises that constitute a rehearsal of war.

The peoples of Sweden and Finland can draw lessons from the historical experience of many other countries demonstrating that NATO, as well as the EU, have never been a shield of protection for the peoples but a source of great risks. They led them to imperialist wars, interventions, dismemberment of countries, border changes, persecution, and refugees.

The history of NATO is drenched in blood. The crimes it committed in Yugoslavia, Libya, Afghanistan, and Syria are still fresh in the minds of the people. The contempt for humanity and life itself runs through the veins of this organization, which only represents the common objectives of the monopoly class of its respective member  states.

In order to strengthen their position in the international struggle between capitalists, they do not hesitate to spill the peoples’ blood. The development that takes place before our very eyes is the strengthening of this tendency; it is the preparation for bloodier wars,  even harsher confrontations, and even more suffering on behalf of the peoples of the world.

As communists, we reject every strengthening of NATO and every imperialist alliance and we condemn the accession of Finland and Sweden to NATO. In words and deeds, the communists have taken an active stance against this development, clearly recognizing the dangers inherent in it.

We know that the peoples will pay the price of the capitalist development and the enlargement of NATO but we are equally certain that, through their struggle, they can decisively stand against and pose serious obstacles to these plans. We are certain that the future belongs to the people.

As events unfold in an increasingly dangerous manner and the bourgeoisie of Sweden and Finland openly side with the butchers of Belgrade, Tripoli, Kabul, etc., the peoples with their struggle can assert their own interests, oppose the accession of their countries to NATO and any imperialist alliance, and struggle for the disengagement of their country from imperialist plans and the slaughter of war.

We intensify our activities for peace and socialism – the only alternative to capitalist barbarity!"