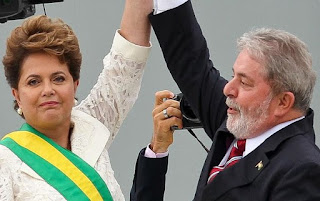 The developments in Brazil, the escalation of the political crisis have been at the centre of attention internationally.
This is not strange, as we are talking about the 7th largest economy in the world, the 5th largest country in terms of area and population, and the largest country in the planet's southern hemisphere. A country that in previous years witnessed high levels of capitalist growth, indeed in 2011 it replaced Britain as being the world's 6th largest economy.
It plays a significant role in the framework of the BRICS alliance (Brazil, Russia, India, China, South Africa) as well as in important inter-state capitalist unions (.e.g.Celac, Mercosur/Unasur) that are being promoted in the American continent. We should also bear in mind that since 2004, i.e. in the period of the "progressive" governments, it has been the head of the military intervention in Haiti, which is being carried out under the mantle of the UN.


Scandals and defections: The "bread and butter" of the bourgeois political system
The process of removing President Dilma Rousseff, 18 months after her victory in the Presidential elections of 2014, which has been accompanied by demonstrations both in her favour and against her and the intense political confrontation is a serious development after a period of 13 years of government headed by a President from the social-democratic PT (Workers Party) that cooperates at a governmental level with the CP of Brazil. It is worth noting here that the Brazilian CP does not take part in the scenarios of the "left management" of capitalism.
It is not easy to draw conclusions if you examine only the surface of the events and various accusations. On the one hand, those that denounce the President for being corrupt are themselves up their necks in scandals. It is indicative that the Speaker of the Parliament, Eduardo Cunha, after triggering the process that led to President Dilma's removal was then himself removed by the Supreme Court, on charges of corruption concerning millions of dollars in bribes right left and centre. Cunha, of course, had been elected Speaker of the Parliament by the votes of the PT and together with Vice President Temer is a member of the "centre" party the PMDB. Vice President Michel Temer who had taken on the duties of Acting President has been condemned for irregularities in his election campaign funding, indeed losing the right to be an electoral candidate for 8 years, while his name along with the names of half a dozen ministers of his "uncorrupted" government are part of investigations regarding the scandal involving the state oil company "Petrobas". So it is not at all strange that in a recent opinion poll 58% stated that they wanted to see him share the fate of his predecessor...
On the other side, the supporters of the President talk about a "parliamentary coup" because the charge that is basis of the impeachment against Dilma- she is accused of "cooking the books" in terms of fiscal data-is not a criminal act. The accusations "betrayal", "a coup" and an "attack against democracy" are of course aimed at their...former allies and the PMBD in particular, the largest partner in the government coalition for the last 8 years (It supported the re-election of Lula in 2006, and the election of Dilma in 2010 and 2014). This party had been assigned the 2nd and 3rd most important positions in the state hierarchy (Vice President and Speaker of Parliament) which they used to support the "progressive government"...

Naturally, the scandals and shady dealings of the bourgeois politicians with capitalists exist and flourish both in Brazil and in our country and in all the capitalist countries. For example, in 2012 around 25 businessmen and politicians, including leading PT officials, were condemned to heavy sentences.
But the "defections" are also a routine matter. The bargains and switching of bourgeois forces from one coalition to another, as well as politicians from the party they were elected with to another are common phenomena, examples of a very fragile bourgeois party political system that is a cause of concern for the ruling class. For this reason, a discussion has begun concerning political reforms in the direction of reinforcing the system.
International experience shows that there are many examples where existing scandals and "cleansing" are used as a vehicle for a violent recomposition of the political system in phases when the economic crisis and the contradictions in the capitalist economy are sharpening.

Towards a change in the formula of capitalist management.
Anyone who studies the situation seriously will understand that the real problem is related to the economy. Truly, after many years of rapid capitalist growth that benefited the Brazilian monopolies and enhanced Brazil's position internationally under the PT governments, the slowdown of the Brazilian economy turned into stagnation in 2014 and in 2015 into a -3.8% recession, with an inflation of the state debt, a rapid increase of inflation and the loss of over 1.5 million jobs.
The exhaustion of the economic policy formula that relied on the expansion of state spending and the orientation towards restrictive measures has been becoming clear for some years in Brazil and in Latin America as a whole. The Dilma government already from 2013 when the first signs of crisis appeared proceeded to implement new measures in favour of capital, such as tax exemptions and exemptions from social security contributions, incentives, even more flexible labour relations, a programme of privatizations that compare with the most "neo-liberal" governments: ports, motorways, airports, oil fields etc.
It is no accident that Henrique Meirelles, the Finance Minister in Temer's government used to the President of the Central Bank during Lula's period in office. Indeed, it is reported that Lula tried in recent years to persuade Dilma to appoint him as Finance Minister in her government.
The situation impedes the social consensus that was sought by the PT governments through a number of policies related to social benefits that reduced absolute-extreme poverty, while continuing a political line to support the monopoly interests, with a very high rate of exploitation of the working class. In any case, no one can hide the reality that over 53 million people live under the poverty line.

Intra-bourgeois confrontations over the issue of international alliances
Significant sections of capital seem to prefer more stable government formations to manage the crisis. The situation is made even more complicated by the fact that China’s economic slowdown had a direct impact on the outbreak of the economic crisis in Brazil, while other BRICS countries like Russia also face difficulties and the inter-imperialist contradictions are sharpening in Latin America as a whole between the USA, EU countries, Russia and China. The concerns regarding the international orientation of the country are intensifying amongst sections of capital.
The controversies inside the ruling class over its international alliances in crisis conditions can lead to an extremely sharp political situation. It is enough for us to take into account the recent example of Ukraine and the trajectory the intra-bourgeois confrontations took in the context of the more general inter-imperialist competition.

The necessity of the anti-capitalist struggle
In such conditions, as we know from history, social-democratic management often prepares the ground for an intensely reactionary turn in the political system and bourgeois forces, which always define "legality" in a way that is convenient for them at any given moment. Such signs have already manifested themselves during Dilma's impeachment process and they will intensify.
The organization of the struggle against the reactionary political line that will be implemented by the Temer government, the internationalist solidarity with the struggles of the workers for their social and democratic rights must be accompanied by a substantial discussion in order to draw conclusions about what led to this situation.
The positions that were promoted about "sustainable" capitalist growth without crises in Brazil did not take into account the relentless economic laws and contradictions of the system and led to illusions. The developments in Brazil were the subject of controversy inside the communist movement as well.
What is needed is the emancipation of the labour movement from bourgeois influences, its orientation towards conflict with the bourgeois state, the monopolies and the political forces that express their interests.
Significant experience has been accumulated from the policies of the bourgeois governments of the second half of the 1980s after the dictatorship and 1990s which caused high levels of poverty and exploitation for the working class of Brazil, as well as from the bourgeois governments of Lula and Rousseff (2002-2016) that continued the management of capitalism with "left" and "anti-neoliberal" slogans and fostered false expectations.
All this provided the basis for serious conclusions to be drawn and for steps to be taken to liberate popular forces from the vicious circle of the alleged "lesser evil". In order for the necessity of anti-capitalist struggle to be advanced decisively, it is necessary for the labour and communist movement to form a strategy independent of bourgeois centres, a strategy that will look towards socialism, which is the precondition for the abolition of exploitation of man by man, utilizing the vast potential of a country with enormous natural resources that are being appropriated by a handful of capitalists.
Note:
1. In one section of the EU reports it is noted that before the elections in 2014 the differences in economic policy between Dilma Rousseff and the other candidate, Neves from the PSDB, were "in practice between them may be less pronounced than their electoral messages suggest."  (http://www.europarl.europa.eu/RegData/etudes/IDAN/2014/536412/EXPO_IDA(2014)536412_EN.pdf)