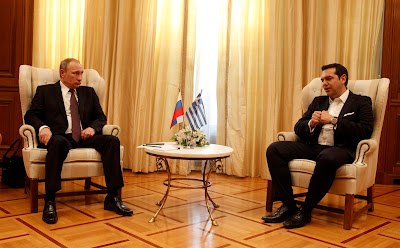 Russia's President Vladimir Putin arrived in Athens today, bringing with him numerous businessmen and representatives of Russian monopoly groups, including Gazprom and Rosneft. Mr.Putin is scheduled to meet with the President of the Hellenic Republic Prokopis Pavlopoulos as well as with Prime Minister Alexis Tsipras, while on Saturday he will pay a visit to Mount Athos in northern Greece.

What is the major purpose of Putin's visit in Greece?

President Putin has clearly stated Moscow's intentions to strengthen Russian economic and geopolitical presense in Greece and the Balkan peninsula. In an article published in 'Kathimerini', Vladimir Putin pointed out his government interest in deepening the Greek-Russian relations, as long as they consist part of the relations between Russia and the EU.


Energy and transportation are two significant issues of interest for Russia's bourgeoisie. President Putin himself confirmed the interest of Russian business groups for Greece's infrastructure in the sector of transportation, through the participation of Russian monopolies in the privatization processes of TRAINOSE (Greek Railways) and Thessaloniki Port. According to information, Russian oil giant Rosneft has achieved a deal with Hellenic Petroleum (ELPE), while there is a significant number of Russian companies interested in signing collaboration deals with Greece's Public Electricity Company.

It is characteristic that after the meeting between Putin and Tsipras, the two governments have planned to sign a declaration for Greek-Russian co-operation on international and regional matters of common interest. Such an agreement will include economic co-operation between Enterprise Greece - Invest in Russia, as well as between ELPE and Rosneft.