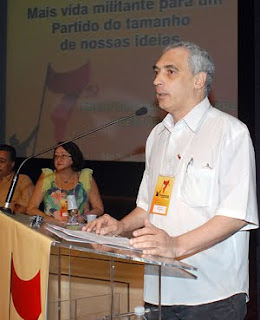 Source: Solidnet.org
The legislative-judicial-mediatic coup d’etat in Brazil is going on. On April 17, under authoritarian and farcical driving, the House of Representatives approved the admissibility of impeachment proceedings against the President of the Republic. In the coming days, the Senate welcome the decision, by simple majority, authorize the opening of the procedure and immediately result in expulsion for up to 180 days of President Dilma Rousseff from the post to which she was democratically elected, with 54 million votes.
By José Reinaldo Carvalho (*).
In few months, the Senate will took the predicable final decision, converted to the Court, under the Presidency of the Supreme Court. The traced and executed script in both congressional houses showed so far that there is a game of marked cards and the exercise of a relentless power of the majority made up of reactionary parties. There are not worth logic, rationality or the truth of the facts. It is an abominable counterfeit trial, led by disgusting politicians. A ritual used to give a false constitutionality to something that is already decided. . A judgment made as an expression of a coup, which does not take into account consistent legal criteria.
In recent days, another throw into unbelievable coup plot, aimed at medium-term future: the request of the Attorney General to the Supreme Court to investigate President Dilma Rousseff and former President Luiz Inacio Lula da Silva for "obstruction operation Lava Jato[1]". Invested of Torquemada powers, the attorney general has denounced Lula as "head of a criminal organization" in the operation of the so-called "petrolão[2]".