Dimitris Koutsoumbas: "Tsipras and SYRIZA are fighting to save the rotten and exploitative capitalist system" 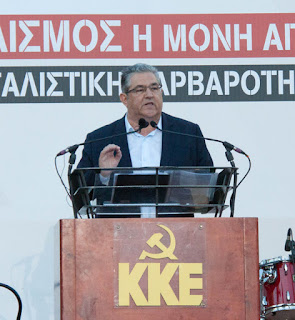 Dimitris Koutsoumbas, General Secretary of Greece's Communist Party (KKE) unleashed a fierce attack against the SYRIZA government of Alexis Tsipras during a public speech on Sunday in Thessaloniki. Speaking at an open public party-organised event honoring the 80th anniversary of May 1936 workers uprising, Koutsoumbas included a well-pointed attack against the social-democratic reformism and hypocrisy of Prime Minister Tsipras and the SYRIZA-ANEL government.

Among other things, the GS of the CC of KKE said the following:

"Lately, SYRIZA delivers 'courses' of leftism and radicalism, like Mr.Tsipras did recently in the Parliament by saying, speaking to our Party, that "in today's difficult circumstances, left and radical is not to fantasize a virtual society, which you know that, even if you fight for that, isn't easy to come, but to 'bleed' in order to crerate- even slowly but steadlily- the circumstances when changes for the protection of rights of many will be able to thrive"!!!

But our difference with SYRIZA isn't that we are fighting for another, 'victual' society as Tsipras says, each party with different way.

Our difference is that the party of SYRIZA is fighting, maybe even bleeding - we don't say the opposite- for capitalist society, for this rotten system, which is exploitative and the only it has to give is poverty, unemploymend and wars.

Mr.Tsipras is fighting for Capitalism to overcome it's difficulties. For that reason, he is managing it's crisis, for that reason he says that the society KKE is fighting for is not easy to come; it is a 'virtual' society... And, as long as it's not easy to come, he (Tsipras) says to the worker, to the unemployed "sit as you are", learn to live, either with nothing, or with a few, don't ask for a lot of things, content yourself to a few crumbs, don't protest, don't demand, don't fight for something that isn't easy to come.

SYRIZA, like the other parties of the bourgeois-antipeople management, is fighting and possibly bleeding, in order to avoid the coming of the society KKE is fighting for, Socialism.

Socialism, the social system for the coming of which KKE is fighting, is not an illusion, is not simply an idea, or a general vision.

It is target to be conquered. Since 1917, the first attempt took place. The society without exploitation of human by human was built; Socialism was built and offered to everyone jobs, education, health, culture, sports to the youth".

In his speech, Koutsoumbas refered to the actual potentials Greece has in order to build Socialism and develop all existing development capabilities under a centralized social-based plan of economy, with people and the working class being in the country's leadership. He also refered to the negative role of the imperialist unions that Greece is part of, like EU and NATO, the threat of becoming part of a war for the profits of the monopolies and the policy that the SYRIZA-ANEL government is following on this matter.


In Defense of Communism ©.
In the following video you can watch the full speech of Secretary Dimitris Koutsoumbas in Thessaloniki (in Greek- No subtitles):