9th May 1945: The day when the Red flag with sickle and hammer was raised thriumphantly over the Reichstag in Berlin. The day when Nazi Germany surrended unconditionally to the Red Army, marking a great victory of humanity over fascism. The 9th May is, without doubt, one of the brightest dates in human history, a glorious day for the first Socialist state, for the Soviet Union and it's people.

On this day, we pay tribute to all those heroes, men and women, who gave their own lives on the battlefields. We remember all those heroes who fought against the monster of Fascism. From the bottom of our heart we express our gratitude to the fighters of the Soviet Army, to the communist and anti-fascist partisans in Europe who led the liberation struggles against the Nazis. We remember and honor all those men and women, of every age, who maintained a heroic stance against the firing squads of the fascists.

On this day, we remember the enormous contribution of the Soviet Union in the victory against Fascism. It was the Union of Soviet Socialist Republics (USSR) which paid the highest cost in human sacrifices and shouldered the major burned of the war. The contribution of the USSR in the fight against the Nazis was both heroic and decisive: More than 20 million dead (along with the disabled and wounded ones the number approaches 30 million), more than 7 million civilian casualties and extensive destruction of infrastructure (32,000 industrial enterprises and almost 65,000 railway kilometres were fully of partially destroyed). 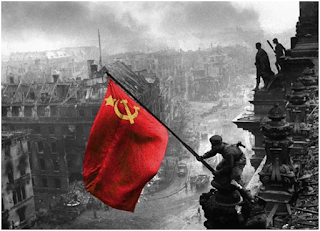 The leading role of the working class and the masses, the socialization of the means of production as well as the central planning of Soviet economy were decisive in preparing Soviet Union's defense against the enemy. The USSR leadership, under the Communist Party of the Bolsheviks and Joseph Stalin personally, had managed to cover a long distance of socio-economic socialist development in a period of 20 years followed the end of the civil war.

Today, we have to face various distortions of the historical truth. The various mechanisms of the bourgeois state, the instruments of capitalism, constantly attempt to vilify the USSR and the achievements of 20th century's Socialism. They try to brainwash people (especially the younger ones) by equating Communism with Nazism under the “umbrella” of “totalitarianism”. They hide that both Fascism and Hitler's Nazism were Capitalism's children, that Nazi Germany was financially supported by European and US monopolies. They hide the fact that the fascist monster emerged from the bowels of the Capitalist system.

It is our duty to defend the historical truth and to expose the anti-communist lies. The 9th of May is a day of remembrance but also a source of inspiration in order to deal with the present and future tasks and struggles with decisiveness, readiness and maturity.