European Communist Initiative: Announcement on the 9th of May - The day of the antifascist victory of the peoples 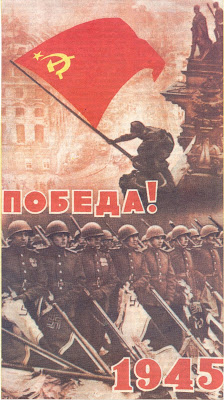 Source: Initiative of Communist & Workers' Parties.
Long live the antifascist victory of the peoples!
The Great Patriotic war of the Soviet people against the Nazi Germany, which was promoted as being invincible at the time, and its allies in Europe ended with the crushing and unconditional surrender of fascism. The 9th of May is the day that signals the end of the 2nd World War in Europe. The Red Army, by raising the red flag with the hammer and sickle over the Reichstag, completed a great people’s victory against fascism.
Fascism was created and supported by the capitalist system itself as a naked and reactionary form of bourgeois management for the protection of capitalist exploitation. The main factor of the fighting capacity and endurance of the Soviet Union was its socialist character, the planned economy, the fact that the people held power in their own hands.
Armed national liberation movements emerged at the side of the USSR in many European countries, movements which acted under the leadership of the communist and workers parties. The communist and workers parties themselves paid a high price in blood in order to crush fascism.


The Communist Initiative consistently exposes and denounces the aim of the EU to erase the great antifascist victory of the peoples, by turning the 9th of May into the “day of Europe”, from the historical memory and experience of the peoples. It fights against the provocative and anti-historical aim of the EU and its governments regarding the identification of communist ideology with Nazi ideology, the identification of the U.S.S.R. with Nazi Germany, the distortion of historical truth, like the establishment of an EU museum of European history that aims to disseminate anticommunism and in particular to brainwash the youth with anti-historical sermons. We condemn the EU policy, which, in fact, support anti-communism, persecution and prohibition of the activities of communist parties, such as are underway in Ukraine, Poland, the Baltic States etc. We denounce the aim of the bourgeois classes of the EU to outlaw the communist symbols and place new obstacles for the dissemination of communist ideas. We object to the provocative ceremonies to honour Nazi criminals and collaborationists, which are being organized today by their political successors in countries that are EU member-states.
Long live the antifascist victory of the peoples!
The historical truth cannot be distorted or erased.