Capitalists' terrorism against strikers in Greece- Reaction by Labor Unions 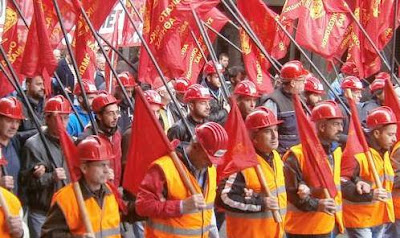 In Defense of Communism © Report.
Info from 902.gr.


On Friday afternoon, Police arrested 30 workers outside the construction site of "Stavros Niarchos Institute" in Neo Faliro. A few hours later, under the pressure of the strikers and workers, the builders were released. His full support and solidarity to the arrested strikers expressed the Communist Party MP Christos Katsiotis who joined the protesting workers outside the Attica Police Administration Headquarters.
In statements issued on Friday, the Greek Federation of Construction Workers and the Athens Construction Workers Labor Union condemned the terrorizing methods used by the large employers-Capitalists and the government.

Greek Shipowners against the Strike.

In the city of Volos, one of the country's major ports, shipowning companies tried to break the workers' strike. Coast-guards attacked the striking dockworkers and arrested a member of PAME who was released a few hours later.

In Piraeus, the shipowners filed in injuction against the administration of the Pan-Hellenic Union of Trailer and Life-Saving shipping Crew in order to prevent them from participating in the 48-hour strike.