Koutsoumbas: “The right side of history is the struggle against the imperialist war in every country” 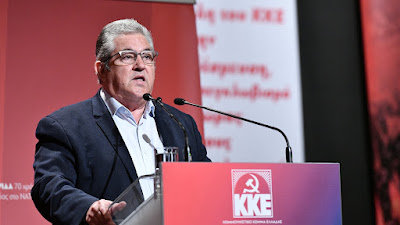 “The anniversary of Greece's accession to NATO may be, without doubt, a black anniversary, but for the working class and the people, especially the younger ones, is also an opportunity: To refer to the blood-stained, full of crimes history of this imperialist organization which continues to be written even today”, stressed out the General Secretary of the CC of the Communist Party of Greece Dimitris Koutsoumbas during a speech at the Party's headquarters in Athens.
On Wednesday 4 May, the Central Committee of the KKE organized a conference on the occasion of the 70 years since Greece's accession to NATO. Except from the General Secretary, thematic speeches were delivered by Giorgos Papakonstantinou, Air Vice-Marshal (Ret.), Vangelis Chorafas, Administrator of GEOEUROPE, Christos Saltapidas, Captain (Ret.), Gregoris Simeonidis, Wing Commander (Ret.), Giannis Aggelou, Colonel (Ret.) and Kostas Skolarikos, member of the CC of the KKE and head of the Party's History Section.

“These days, the pages of NATO's bloody history are being written in Ukraine, where the fire of the war is burning and which wasn't suddenly ignited a few months ago with the unacceptable intervention of capitalist Russia, but has been smoldering for years, for more than a decade”, Dimitris Koutsoumbas said.

Among others, the KKE General Secretary said: “The responsibilities of both imperialist camps are highlighted, on the one hand Russia and on the other NATO, the US and the EU, which compete with each other over who will have the upper hand in the share of markets, mineral wealth, energy, land and labor, pipelines and network of transportation of goods”.

General Secretary Koutsoumbas condemned the Greek bourgeois parties, including the ruling conservative New Democracy and the social democratic SYRIZA and PASOK, for their pro-NATO policy, underlining that all the previous governments served the goal of the geostrategic upgrade of Greek capitalism thus participating actively in the Euro-Atlantic plans.

The KKE leader referred to the intensification of the international competition between the USA, NATO, EU, Russia and China, which proves that “we have entered a new phase, the redistribution of the world”. He underlined the danger of new military confrontations in the Balkans, the Middle East, North Africa and the Persian Gulf, pointing out that the upcoming NATO Summit in June will intensify the aggression of the murderous alliance, something that is also marked by the possibility of Sweden and Finland's accession to NATO.
“When, alongside with NATO or separately, the EU intensifies its militarization, in the effort to gain another “armed hand” against the people, apart from the one of NATO, then our people, the other peoples, can understand that the writing of history in the 21st century has began. And when history is written, then our people, all the peoples, must choose the right side”, Dimitris Koutsoumbas said.

“And the right side of history isn't the choice to enlist by the side of the bourgeois class for the upgrade of its interests in the international competition, on the side of one camp against another”, the KKE leader stressed out and added: “The right side of history is the struggle, in every country, against the imperialist war and the struggle against the involvement of any country in it”.