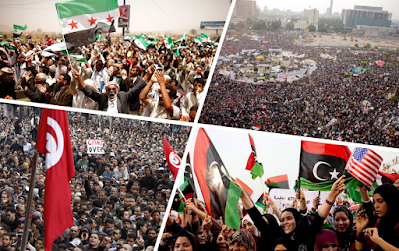 It was like yesterday, 10 years ago, when an event that took place in Tunisia was to go down in history. It was the self-immolation, out of desperation, of young fruit seller Mohamed Bouazizi outside the local governor's office at the small town of Sidi Bouzid. It was an act which marked a wave of protests that the bourgeoisie named “Arab Spring” and which continued in Northern African countries, Libya, Egypt and crossed into Syria. In fact, opportunist forces, like SYRIZA in our country, talked about a “popular revolution”.
But what is the truth and what did this process mean for the people? One month after the young seller's self-immolation, the hated by the people but an ally of imperialists Ben Ali was overthrown and regime changes were launched in other countries as well, while the U.S, NATO, EU and various “petty leftists” were celebrating for the “victory of democracy against the nepotism and authoritarianism” of Ben Ali, Qaddafi, Mubarak and public opinion was preparing for the attack in Syria.

The bourgeois staffs and the services of powerful imperialist countries, the U.S. and the EU states, masterfully utilized the existing popular reaction against these authoritarian regimes and, together with their bourgeois allies in each country, promoted broader plans in order to facilitate the businesses of their own monopoly groups against their competitors. The so-called “spontaneous movements” in North Africa and later those of the “indignants” (various opportunists under the anti-memorandum “banner” were asking Athens to become Cairo's Tahrir Square) proved to be the vehicle for bourgeois transition. After all, information that came to light showed that during the “Arab Spring” various services and monopoly groups, such as “Google”, were activated in order to lead the developments where the imperialist powers wanted. Back then, the KKE had been vilified by all kinds of opportunists for... not understanding the popular revolution, but its well-documented analysis proved to be the only correct one: That is the fact that the regime changes were related to modernizations in the bourgeois political system which were also linked to interventions based on the US-NATO plan “Great Middle East”.

The involvement of services of imperialist states in many countries and in the whole region, from North Africa to the Middle East, was proved in the following yers. The case of the imperialist intervention in Syria, the eruption of the “Islamic State” tool which now appears as a terrorist enemy, the developments in Tunisia, Libya, Egypt not only didn't bring any “spring” to the people, but brought a heavy winter for their rights, death, poverty, impoverishment, expansion of refugees.

NATO's “humanitarian interventions” not only didn't bring and do not bring peace and security but, on the contrary, they perpetuate conflicts and wars for years, so that they can dominate under the “divine and rule” doctrine. Also, the energy wealth that was the main issue of the interventions, the plans for its exploitation and utilization, instead of being a blessing for the people, it becomes a disaster as far as it is a subject of relentless competition between powerful monopoly interests that have no hesitation at all when it comes to profit. This is what the people of Libya, Syria, Yemen and other countries are paying with their own blood. It is also proved that the emergence of Greece, under the responsibility of the bourgeois governments (ND, PASOK, SYRIZA), as a pillar of the U.S-NATO plans in the wider region which includes East Mediterranean, North Africa, Balkans and the Caucasus, can only bring suffering for our people and the other people of the region.