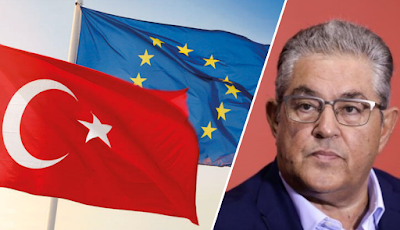 “Once again the “masks are off” for the EU, for the government, for all those who present such alliances as guarantors of peace and the sovereign rights of Greece and Cyprus.

Once again, the verbal condemnations, the postponement of the debate as well as the fake sanctions for (Turkey's) violations of the Cypriot EEZ, are only a “green light” for the aggression of the Turkish government. The argument that justifies this decision of the EU Summit, by simply presenting it as a standby for the new U.S. government, is ludicrous since the U.S. are on the same exact direction.

In fact, what interests both the EU, as well as the U.S and NATO, is the preservation of the multifaceted relations – economic and military – that they are developing with Turkey and her stay in the Euro-Atlantic camp. This is the basis upon which the negotiations and the bargaining are taking place.

It is obvious that the ND government, like the previous governments, participates in these dangerous bazaars because their top priority is the geostrategic upgrade of the Greek ruling class, that is its participation in the share of the spoils in the region.

In must be noted that during the last months, Erdogan's government has escalated its aggression in East Mediterranean by challenging Greece's sovereign rights and conducting illegal drillings within a few nautical miles from the islands of Kastelorizo and Rhodes.