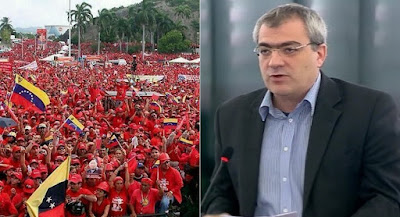 "Only the people of Venezuela have the responsibility to defend their interests and to elect their country's leadership" said Kostas Papadakis, EU Parliament's member from the Communist Party of Greece, during the discussion about the "situation in Venezuela".

Papadakis denounced "the crude intervention of the USA, EU, NATO and governments of Latin America in Venezuela's internal affairs and their attempt to impose, through a coup d'etat, a puppet-president". The KKE MEP condemned the threats of the imperialists about a possible military intervention, as well as the stance of european governments.

He said: "We denounce the stance of governments, such as the ones of Germany, Spain, Portugal, etc. As for the Greek government, it does not say a word about the US intervention in Venezuela", also highlighting the hypocrisy SYRIZA administration on the matter.

The Communist MEP underlined that the KKE "expresses its solidarity with the Venezuelan people who are experiencing capitalist exploitation and crisis. We support the Communist Party of Venezuela in its struggle for the rights of the working class, so that the people will live without exploitation and imperialist interventions".