KKE: Merkel's visit is a praise to Tsipras for the anti-people reforms he implemented 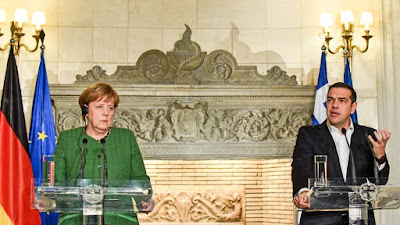 "The fact that Mrs. Merkel is the first one who rushes to provide a "confidence vote" to Mr. Tsipras consists by itself a criterion for the need of the people to vote against this government by all means", writes a statement of the Communist Party of Greece (KKE) on the occasion of German Chancellor Angela Merkel's visit in Athens and her common declarations with Prime Minister Alexis Tsipras.


"After american imperialism Mr. Tsipras also whitewashes the role of Germany in the implementation of anti-people memorandums. For that reason the visit of Merkel, in an election year, apart from the promotion and consolidation of German capital's economic interests in Greece and the region, is nothing more than support, a praise to Mr. Tsipras for his repentance statements and the dirty join he did, both for the anti-people reforms in favor of the capital that he implemented as well as for the dangerous NATO plans he promoted in the region", points out the statement of the Communist Party.

"After all, the statement writes, the support of Merkel in the Prespes agreement, which expresses the aims of the German factor, which - it must be noted- played a leading role in the escalation of nationalism in the Balkans and the dissolution of Yugoslavia, clearly shows that this agreement was dictated by the needs of the euroatlantic plans".

The statement of the KKE also states: "Today Mr. Tsipras proved that he belongs to the samel family with Mrs. Merkel, the one of the EU one-way street and of the lasting austerity memorandums that the EU imposes. He repeated the mockery about a supposed "social" EU, as well as his known manipulation to clump every voice of challenge against the EU with far-right, reactionary forces. Moreover, he included Mrs. Merkel in the alliance against the far-right, which is like trying to extinguish the fire by using gas".

"As for the German reparations, the statement points out, Mr. Tsipras surpassed them with half a sentence, something that is in line with his stance during the last four years, when he did nothing substantial in order to assert them, in order not to disrupt the alliances with german capital".