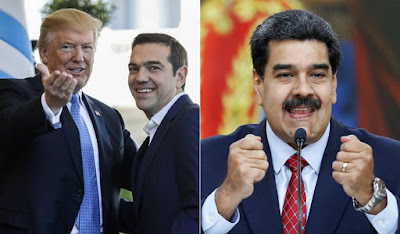 Does the government of SYRIZA in Greece support the legitimate administration of Nicolas Maduro in Venezuela, or not? The answer in this question exposes the unbearable hypocrisy of Tsipras' government which "steps in two boats" at the same time.

On one hand, the Greek government is aligned with the official EU policy which is blackmailing Maduro, calling for "urgent elections" in Venezuela. On the other hand, the governmental party, SYRIZA, has expressed its "full support and solidarity to the country's legal president".

On Friday, the Secretary of the CC of SYRIZA Panos Skourletis met with Venezuela's ambassador in Athens expressing the party's support to Maduro. However, in the statement issued by SYRIZA, there is not a single reference to the U.S. intervention! Apparently, the officials of SYRIZA want to express their solidarity towards Venezuela but without dissapointing their imperialist partners!

The contradiction is more than obvious: While Skourletiis was expressing SYRIZA's support towards Maduro government, the EU's foreign policy chief Federica Mongherini was urging Venezuela to hold "free, transparent and credible presidential elections", noting that otherwise the EU will officially recognize Juan Guaido as the country's President.

Of course, Mongherini's ultimatum towards Maduro bears the signature of all 28 EU governments, including the SYRIZA one. This is another proof of the fact that the SYRIZA government is a "stooge" of the imperialists disguised in a leftist and progressive cloak.

Communist Parties against US-backed coup in Venezuela (click on image)