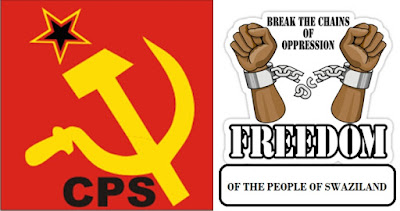 The two leaders were in the company of a large group which was crossing the road legally. The police arrested only the two and let everyone else leave. When Comrade Njabulo Dlamini pointed out the obvious anomaly, the police threatened him with violence.  A back-up of about 30 police, half of whom were plain clothed, then stormed the arrest scene and forcefully dragged them into a police van. They then decided to charge him with “obstruction of police on duty”. Comrade Mcolisi Ngcamphalala was also charged with resisting arrest for raising the same questions concerning the obviously illegal and unreasonable act by the police.
During the arrest, the police were making all sorts of threats and insults against them. They threatened to “fix” them, among other utterances. They intended to keep them in the police holding cells the whole weekend until Monday, 14 January, merely “to prove we can do whatever we want with you!”, as the police boasted.
Thankfully, a human rights lawyer reacted promptly when alerted by other activists and demanded that the comrades be released. He succeeded to secure their release. They will appear before the Manzini Magistrate’s Court on Monday, 14 January 2019, at 09h00.
It is interesting that the two leaders, who have been at the forefront of workers’ struggles in recent years, were snatched while on their way to prepare for a teachers’ meeting that was scheduled for tomorrow, Saturday 12 January. This was clearly a ploy by the Mswati autocracy to disrupt the preparatory meeting.
As the CPS we are not shocked by the latest machinations of the regime. It is a well-documented fact that the regime has been following communists inside and outside Swaziland, intending to cripple the CPS and workers’ struggles. Late last year the Swazi Observer, a newspaper owned by sub-Saharan Africa’s last absolute monarch, Mswati, went to the extent of publishing the two leaders’ pictures, claiming that they were the ringleaders during workers’ actions. The intention was to divide the workers, cause division between the workers and the CPS and also cripple the CPS.
The CPS has continued to practically and publicly support the demands of workers in Swaziland. We expected the regime to resort to such tricks; to try and intimidate workers into submission. The CPS continues to make the call for Maximum Defiance in the Maximum Number of Sites – against the autocratic regime! We will intensify our support for the struggling masses of Swaziland, where close to 70 percent of the people survive on less than US$2 a day.
This continued victimisation of communist cadres and workers will force the CPS to respond with direct decisive force against these agents of oppression. We will not allow the regime to silence workers into submission. These sham charges must be dropped, including the charges of all other activists who have been out on bail for many years. We also call for the unconditional release of political prisoners.
The CPS finally calls for the intensification of local and international solidarity with civil servants who will, from 28 January 2019, embark on a strike action to demand a 6.55 percent cost of living adjustment.