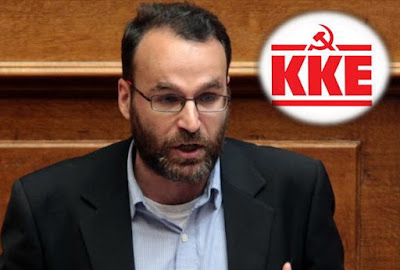 Giokas said that the government's policy is to play the role of NATO's flag-bearer in the region, making agreements for new military bases and arms purschase, as well as by closing a series of issues such as the FYROM name case. Through this way, the government argues that it will contribute to the country's upgrade in the region for the benefit of the people.


This is a great danger and a great deception, said the KKE MP. Giokas and added that on the contrary of the governmental claims, this policy- which the government implements because it consists a goal of the Greek capital- will bear significant risks and dangers for the country's people.

Referring to the recent collision in Imia [1] [2], Giannis Giokas pointed out that there is an "escalation of the Turkish provocation during the last period" and that the reasons for the Imia incident "are not what Mr.Tsipras claimed as an irresponsible attitude of the Turkish coastguard, but consists a conscious strategy followed by Turkey, not only towards Greece but also towards other countries of the region".

As the KKE MP said, "At the moment, Turkey has military occupational forces in three countries, including Iraq, Syria and of course, Cyprus" and underlined the fact that "the Greek government bears serious responsibility for the fact that during the last period and especially after Erdogan's visit, systematically cultivated an environment of complacency and continues to do so".

"The most important", Giokas underlined, "is that the government has actually proclaimed NATO, USA and the EU as guarantors of security and stability in the Aegean". He added that, on the contrary, these forces are factors of instability in the Aegean and the broader region and criticized the "Pontius Pilate" stance of the USA and NATO which call the two countries to patch up.