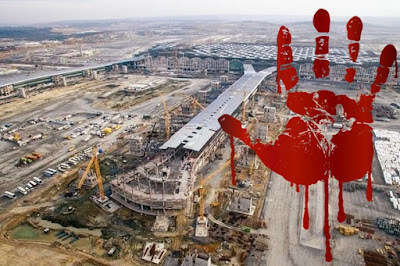 According to interesting reports by soL international, construction workers held a protest on February 1 at Istanbul’s third airport project site, showing the reaction against the poor working conditions and non-payments.

Around 1500 thousands of workers protested the working conditions, as their working hours were extended so as to finish the airport project that is still under construction. The workers closed the road to traffic while protesting the project owners.

The protestor workers say their shuttle services are inadequate and the food service is so poor that they have to sleep hungry since their work shifts and shuttle hours are irregular.


The workers point out that the subcontractor companies did not carry out the payments of minimum living allowances as project authorities claim that they cannot do anything about this situation, showing the subcontractors as “authority”.

soL News previously talked with construction workers who were forced to live in dirty, overcrowded and infested rooms. Workers said that they were forced to work overtime even during the meal times to finish Istanbul’s new airport project until February 26, the birthday of Turkish President Recep Tayyip Erdogan.

More specifically, according to a soL report earlier on January 2018:

Constructions workers say that they are forced to live in dirty and overcrowded rooms where are full of bedbugs despite their application to the directorate for insecticide. Furthermore, the workers are not provided with necessary working equipment. One of the workers says that they are forced to work with deformed gloves and non-waterproof boots.

"There is preparation for a big show for the birthday of Tayyip Erdogan. We are working overtime, we are working even during the meal times, they have eliminated our recreational areas, we are working 7 days a week," a worker said.

Indicating that harsh working days in winter are open to occupational accidents, a construction worker says that there is almost no precaution at the construction site. 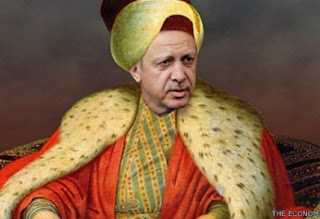 One more worker died by another occupational murder in the construction side of Istanbul’s third airport. Orhan Bingöl, who started to work in the site only two days ago before his death, died in fall on January 22. According to the worker's brother, Metin Bingöl, Orhan fell and died because there was no safety rail.

The worker's brother, who is also working in the same construction site, stated that the managers let them work without any safety measures, think the real deaths are much more than what the official number says, because there is a high lelev od negligence regarding workers' safety.

Orhan, according to the brother, was trapped by an invisible empty space covered by a door. Since he did not know that the door opens to an emptiness, he fell down. The brother says "he also escaped from this dangerous situation by chance and he informed the managers about this danger". However, he states, nobody has done anything about this risky place. The brother also states that they waited for the ambulance for about 40 minutes.

Although the workers were told that they would be given training for work safety, their manager did not allow them to take this required training and let them work without any safety measures.

The construction site of the third airport has been known by the high number of occupational murders as well as its damages to nature. The construction site that started to be built in June 2014 has been the site of occupational murders whose numbers are tried to be hidden from the public. As the workers stated, according to the sources, it is hard to track down the actual number of murders since there are too many subcontracting firms in the site.

It must be noted that Istanbul has already two international airports, Atatürk Airport on the European side of the city and Sabiha Gökçen Airport on the Asian side, and Istanbul's new airport is promoted as a great success by Erdoğan's AKP government. A "success" apparently painted by the blood of workers...