Not only did the KKE not support these specific demonstrations, but it took a position against them, denounced ND and the other parties that sought to fish in the murky waters of nationalism and to whitewash the fascists, which participated in them.

So, the report of the Albanian newspaper "Shekulli" ("Century") that claimed that the KKE supported these demonstrations can only provoke disgust. Despite the swift reaction of the International Relations Section of the CC of the KKE, which demanded that the newspaper correct this and cease misinforming its readers, this has not yet happened. It is apparent that, apart from anything else, the "Big Albania" chauvinism, which is sown by the bourgeois political forces and basic mass media in the neighbouring country, "blinds" people. However, no one can blacken the KKE and its activity.

The KKE from the first years of its existence opposed the chauvinist expansionism of the Greek bourgeois class, which like other forms of national expansionism that developed and are developing in the region and aim to place the workers "under a false flag", under the flag of the capitalists, to lead them to shed blood for the interests of capital and to conceal the common class interests of the working class of the Balkans. The KKE maintains a strong ideological-political front against chauvinist expansionism, nationalism and jingoism. Both during the nationalist campaign that broke out in Greece in 1992 (in which all the political parties took part including Synaspismos-the predecessor of SYRIZA) and now, the KKE defended the truth:It stressed that it is an undeniable fact that Macedonia is a large geographical region, which was shared amongst four Balkan countries on the basis of the Treaty of Bucharest in 1913.At that time Greece received 51%, Serbia 39% (FYROM), Bulgaria 9.5% and Albania 0.5%.In addition, the KKE noted that the rejection of this reality via the slogan "Macedonia is exclusively Greek", meaning the entire region of Macedonia, opens a Pandora's Box. It feeds nationalism and irredentism. It provides an alibi for all those who desire a revision of International Treaties, like the ruling class of Turkey that disputes the Treaty of Lausanne. This is the way the fuse of the powder kegs will be lit in the Balkans.

At the same time, the KKE opposed the cosmopolitanism of capital, which in the current conditions is being fostered by the SYRIZA-ANEL government that seeks an agreement on the name of FYROM, without in essence dealing with issues of irredentism, so that the neighbouring country's accession to NATO and the EU is facilitated. So the SYRIZA-ANEL government demonstrates that it has taken of the role of the "flag bearer" for NATO, the USA, the EU. It expands the US-NATO bases in Greece. It spends enormous sums to buy NATO military hardware, which the Greek people pay a heavy price for. It enhances the cooperation with murderous states, such as Israel and Saudi Arabia. It seeks to integrate the so-called "Western Balkans" into the imperialist unions of NATO and the EU. The EU-NATO plans are unfolding in the framework of their fierce competition with Russia and China in the region.

The "left" government is seeking via these initiatives to facilitate the penetration of Greek capital in the Balkans so that it can increase its profitability and to promote the goal of the so-called "geostrategic enhancement of the country", which in reality has nothing to do with the prosperity, peace and security of the Greek people and other peoples of the region.

The KKE underscores that the participation in NATO and the EU for the people of Greece and every country is not a factor for security and this is demonstrated by the Greco-Turkish relations. We see here that the provocativeness of the Turkish bourgeois class via its basic political forces (AKP and CHP), which disputes the sovereign rights of Greece in the Aegean, continues its violations with warships and airplanes, openly calls into question the treaties that demarcate the borders, threatens war if the the Law of the Sea is applied by Greece in the Aegean etc. 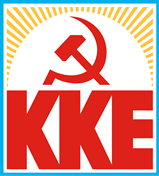 The KKE strengthens its struggle against Greece's participation in the dangerous imperialist plans. It demands the closure of the Suda base and all the foreign military bases in Greece. It demands the return home of the Greek military forces involved in missions outside its borders. It demands the country's disengagement from NATO and the EU and considers that this can only be guaranteed for the people by workers' power.

The KKE stresses that the peoples can march on their own path of hope, of joint struggle in order to drive the imperialists out of the Balkans and the wider region, in order to overthrow the barbaric capitalist system that creates poverty and wars.

With these goals in mind, it announced that it would organize a major demonstration on Tuesday 27th of February in Syntagma sq. (outside the Parliament) where Dimitris Koutsoumpas, GS of the CC of the KKE, would speak on the subject of:"The positions of the KKE on the developments in the Balkans, Middle East, the Eastern Mediterranean, Greco-Turkish relations, the Cyprus Issue" and afterwards there will be a march to the US embassy in Athens, with as its basic slogans:

No to the plans of the USA-NATO-EU
The imperialists redivide the world and divide the peoples
No to the political line of the SYRIZA-ANEL government. It plays the role of NATO's "salesman".