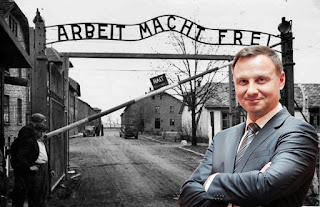 The new law will impose prison sentences of up to three years for mentioning the term “Polish death camps” and for suggesting “publicly and against the facts” that the Polish nation or state was complicit in Nazi Germany’s crimes.


"I have decided to sign the law but also to send it to the Constitutional Tribunal," Duda told reporters in Warsaw.

He said that his decision "preserves the interests of Poland, our dignity and the historical truth" and also "takes into account the sensitivity of those for whom the question of historical memory of the Holocaust remains exceptionally important, especially those who have survived and who, as long as they can, should tell the world about this past and their experience".

The law- which has sparked tensions within Poland as well as in the relations of Warsaw with Israel- consists part of a broader effort by the right-wing, nationalist Polish government to promote a revisionist account of history. That includes the demolition of numerous Soviet-era monuments dedicated to the heroic Red Army, as well as the glorification of WW2 Nazi collaborators who are now presented as "patriots" and "heroes".
IN DEFENSE OF COMMUNISM ©