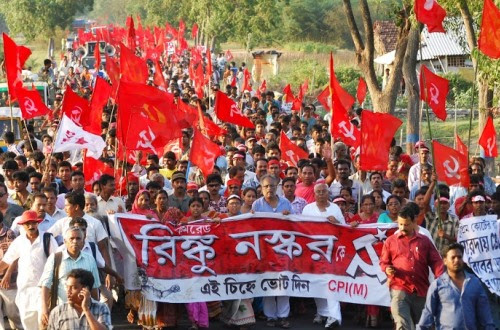 Source: Solidnet.
The Modi government has taken the dangerous step of deepening military collaboration with the United States by agreeing to allow US armed forces to use base facilities in Indian naval and air force bases.
The US Defence Secretary and the Indian Defence Minister have announced an in principle agreement has been reached for a Logistics Exchange  Memorandum of Agreement (LEMOA). This is just another name for the Logistic Support Agreement (LSA) that the United States enters into with military allies like Philippines, South Korea and Japan. Unlike what the Defence Minister says, refueling, maintenance and repair facilities for American ships and airplanes will require the  stationing of US armed forces personnel on Indian soil on a regular basis.


Along with this agreement, the Defence Minister has indicated that two other agreements are on the anvil, Communication and Information Security Memorandum of Agreement (CISMOA) and Basic Exchange and Cooperation Agreement (BECA).  These will make the Indian armed forces command and control structure integrated with the US armed forces. In doing so, the BJP government has crossed a line which no other government has done  since independence - converting India into a fullfledged military ally of the United States.
By this, the Modi government has compromised national sovereignty and the strategic autonomy of the country.  All political parties and patriotic citizens should oppose this surrender to the USA. The Modi government must be told that these anti-national steps do not have the support of the people. It should immediately retract from signing the Logistics Agreement.
Posted by In Defense of Communism