KKE: The Berlin Conference on Libya is not a process for the benefit of the Libyan people 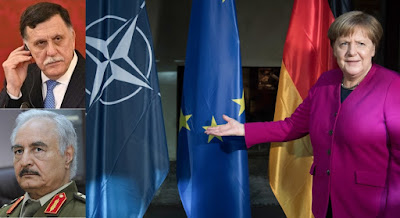 On the occasion of the International Conference on Libya that is taking place in Berlin and the discussion about Greece's non-participation in it, the Press Bureau of the CC of the Communist Party of Greece (KKE) issued a statement which was published on 902 portal.

The statement of the KKE reads the following:


"The International Conference for Libya in Berlin, the only purpose of which is the determination of this country's future based on the interests of the imperialists who first destroyed and dismembered it, is not a process that benefits that Libyan people and the other peoples of the region.

It is indicative that the participants in the Conference are NATO-affiliated and other forces which are responsible for the imperialist intervention in Libya, the bombing and dissolution of the country and which today compete and negotiate for the control of the energy resources. These forces are either on the side of the “government of Tripoli”, either with General Haftar or are bargaining with both at the same time.

The “imperialist peace” they are discussing about cannot solve for the people's benefit the problems that have been created.

As for the discussion and the controversy regarding Greece's participation or not in the Conference, it reveals the following:

First, the bumptious and unfouded assertion by the New Democracy (ND) government and its predecessor of SYRIZA about the alleged “international isolation of Turkey”, while Turkey plays an essential role in the developments within the context of the US-NATO plans, which tolerated the signing of her unacceptable maritime agreement with the Sarraj government.

Secondly, the deep agreement of all the other parties that claim Greece's participation in this International Conference, with the imperialist plans in the region, since this is exclusively the Conference's subject.

This further involvement of Greece, which is a commonplace for all the other political forces, serves only the participation of sections of the Greek capital in the sharing of the “plunder” and does not offer any benefit for the peace and security of the people, as well as to Greece's sovereign rights."