Remembering Fidel Castro: "The use of nuclear weapons would mean the end of humanity" 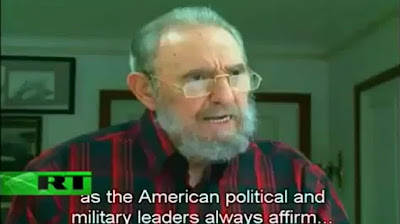 Today, when the United States' imperialist aggression against Iran has escalated tensions in the Middle East thus increasing the dangers of a generalized conflict, the words of Fidel Castro Ruz have extaordinarily relevance.
In a message back in 2010, the unforgettable leader of the Cuban Revolution, Comandante en jefe Fidel Castro, was warning us about the grave dangers of a nuclear war:

"The use of nuclear weapons in a new war would mean the end of humanity. This was foreseen by scientist Albert Einstein, who was able to measure their destructive capacity to produce heat of millions of degrees that would vaporize everything within a wide radius of impact. The brilliant researcher was the driving force behind the development of this weapon, before it was available to the genocidal Nazi regime.
All the world’s governments are obliged to respect the right to life of all nations and all peoples on the planet.
Today there is an imminent danger of war with the use of such weapons, and I have no doubt that an attack by the United States and Israel on the Islamic Republic of Iran would inevitably become a global nuclear conflict.
It is the duty of peoples to demand their right to live from political leaders. When the lives of the species, the people and their most loved ones are in such danger, no one can afford to be indifferent, nor can a minute be wasted in demanding respect for that right; tomorrow will be too late.
Albert Einstein himself said: "I know not with what weapons World War III will be fought, but World War IV will be fought with sticks and stones." We know what he meant, and he was absolutely right, only that there would no longer be anyone to use sticks or stones.
There may be collateral damage, U.S. political and military leaders always say, to justify the death of innocent people.
In a nuclear war, the collateral damage would be human life.
Let us have the courage to proclaim that all nuclear and conventional weapons, everything that serves to wage war, must disappear!
Fidel Castro Ruz
October 15, 2010".