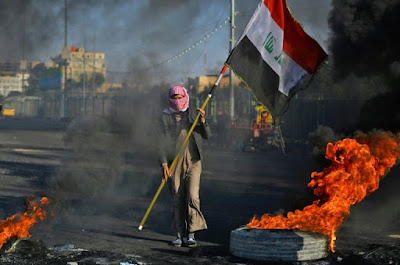 As mass demonstrations and brutal repression by the authorites continue in Iraq, the Communist Party intervenes with a statement demanding an end to the bloodshed and calls the government to proceed  to early elections.

"The past few days have again witnessed the escalation of bloody repression by the security forces against the demonstrators in Baghdad and other provinces, which led to the death of more demonstrators and dozens injured.

In addition to repeatedly using live bullets, yesterday the security forces also attacked the sit-ins in squares in Baghdad and Basra and burned the protesters' tents, in a new attempt by the regime to end the peaceful protests by force.

Disregard and procrastination continue in dealing with the legitimate demands of the people. It is this stance which we have always warned against, and this is what has forced the protesters in recent days to take escalatory steps whilst maintaining a peaceful character.

The continuing acts of repression, intentional killings, assassinations, arrests, kidnappings, stifling and violating the freedom of expression will not help break the morale of the people and force them to return to their homes. Among recent victims of this campaign of repression was a Communist youth, the martyr Fahad al-Alyawi, who was treacherously killed yesterday on Muhammad al-Qasim Highway in Baghdad as he tried to reach his comrades who were protesting there, carrying food to them.

The authorities and the groups that are in charge of decision-making must spare the citizens further bloodshed by complying immediately with the will of the people and their demands to form a new government of competent and patriotic figures, away from the system of sectarian power-sharing and corruption. This government should provide the prerequisites for early elections, after enacting a fair election law and the formation of a truly independent Electoral Commission, away from power-sharing, corruption and those whose have the blood of the participants in the Uprising on their hands.

This is the solution, and the starting point on the path of salvation from another dark era which wasted 16 years of our people’s lives.

We glorify the martyrs, and wish speedy recovery for the wounded and injured, and freedom for the detainees."