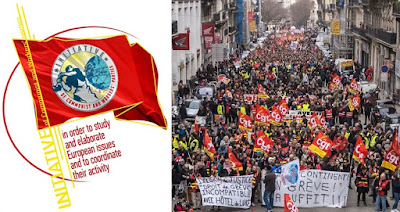 The government’s attack on wages, pensions, and the right to Social Security itself concerns not only workers in France but in every country. Because the capital, seeking to increase its profitability, promotes the jungle of employment relations, with flexible, cheap and wandering workers without labor and social insurance rights.

We denounce the brutal repression and campaign of slander and defamation of the working class struggle by the Macron government.

The maneuvers and the blackmail by the French government, leavinguntouched the core of the reactionary measures it seeks to implement, must fail.

We strengthen the solidarity with the struggle of French workers, and all countries, for contemporary insurance-pension and labor rights. We call the workers of Europe to strengthen their mobilization against similar measures that have been or are going to be taken in their countries with the same willpower as French workers. The workers are the producers of wealth and they claim it.

Long live the struggle of the workers of France.