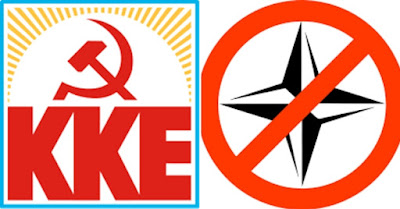 "The NATO Summit in London considers the further strengthening of the aggressive planning of the wolf-pack alliance against the people. It accelerates the implementation of the decisions of previous Summits for the creation of ground, air and naval military units, preparing for new imperialist wars. It takes additional steps in the competition with Russia and China. Moreover, the NATO Summit considers the even bigger increase of military spending, while Greece is already paying 4.3 billion per year for (military) equipment intended for NATO needs.


New elements are being added in every Summit for the extension of NATO's activity and the modernization of weapon systems, including nuclear weapons, especially after the annulment of the Agreement for the Medium Range nuclear weapons.

The contradictions that emerge have no relation with the people's interests and, at this time, they particularly express France's effort towards the strengthening of the autonomous EU imperialist activity and the creation of the EU army in collaboration with NATO.

NATO's 70-year course has been marked by dozens of imperialist wars, interventions, threats and coups. The positions of the New Democracy (ND) government, of SYRIZA and the other bourgeois parties, which claim that NATO and the EU are supposedly forces of stability and security, consist a provocation for our people and the other people.

The "whining" of the government and the other bourgeois parties regarding the "Pontius Pilate" stance of NATO, USA and the EU towards the escalation of Turkish aggression, which is also manifested with the arbitrary agreement with the so-called government of Libya, confirm how dangerous is the policy that entraps our country in imperialist alliances. The statements by NATO Secretary General that "NATO isn't part of such issues" are characteristic.

The KKE calls the people to strengthen the struggle against the imperialist organizations and their plans, against the Greek-US Agreement, for the unravelling of the US-NATO bases in Greece and the country's disengagement from NATO and the EU".