The 60th anniversary of the Cuban Revolution was honored in Greece 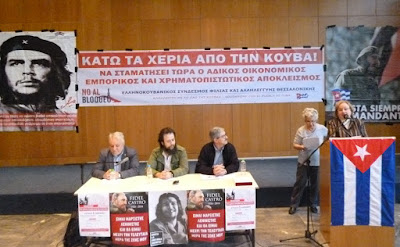 In an event organized by the Hellenic-Cuban Association of Friendship and Solidarity in Thessaloniki, Greece's second largest city, hundreds of people paid tribute to the 60th anniversary of the Cuban Revolution. The event was attended by the Ambassador of Cuba in Greece Zelmys Maria Dominguez Cortina who delivered a greeting speech.

The Communist Party of Greece (KKE) was represented by Theano Kapeti, member of the Central Committee and Secretary of the Party Organisation of Central Macedonia of the KKE. Apart from the Cuban Ambassador, speeches were delivered by Nikos Mottas, General Secretary of the Hellenic-Cuban Association of Thessaloniki and Nikos Zokas, Vice President of the Greek Committee for International Detente and Peace (EEDYE).

The moderator of the event was Apostolos Skoufas, President of Hellenic-Cuban Association, who, in a short message, underlined the need to strengthen the struggle against the genocidal economic, trade and financial blockade that the U.S. have imposed on Cuba.

In her speech, Zelmys Maria Dominguez Cortina pointed out among other things:

"The solidarity support of the friends of Cuba has been very important during these years of hard battle of our people to maintain their national sovereignty in the face of threats and hostility from our powerful neighbor, who has not resigned himself to losing precious possession , nor has he resigned himself to passively observing the example of a people who do not follow hisr mandates and face the greatest empire on earth, with great technological development and with a powerful industrial military complex that unleashes wars in the world without caring about the victims , nor the rights of peoples.

Cuba has been David against the giant Goliath. Other peoples see Cuba as a beacon, as an example of dignity, of firmness. And it is precisely that example that USA fears. Cuba is not a military threat, it is a small country without great natural resources, without the riches that a country like the United States possesses, but it has the great richness of its history, of its heroic people who have managed to fight for its freedom and sovereignty.

But dignity comes at a price, a price that the Cuban people have paid every day during these 60 years of revolution, 60 years of struggles, victories, sacrifices and resistance of a heroic people.  It has been an ongoing struggle to build a better future and leave behind the past where we were one more possession of USA."

The Cuban Ambassador refered to the harsh anti-Cuban policy that the current U.S. administration under Donald Trump implements, but underlined that despite the continuous hostility of the large imperialist neighbor "Cuba will not surrender, nor make concessions of principle, nor cease to be supportive and internationalist with the peoples who fight for their rights, nor fail to condemn and denounce the actions of imperialism".

She concluded her speech by saying: "The blood of the fallen points us to the path of struggle. We take from their hands the flags of the homeland and duty. Cubans will follow the example of our leaders, we will give our lives if necessary to defend the revolution.  I assure you, friends, that the Cuban people do not give up, will continue their struggle and heroic resistance to maintain their true independence with their cry of "Homeland or Death, we will win!”

Nikos Mottas stressed out that the Cuban Revolution continues, 60 years later, to magnetize the interest of people of all ages because, as he said, "the Revolution of Cuba expresses a very deep historical truth. That a people, no matter how small it is, no matter how strong opponents it has, can rise up its head, revolt, overthrow the prevailing order of things and become the master in its own place. As Cuba's national poet, Jose Marti, wrote: "Rights are to be seized, not begged for!".

In other parts of his speech Nikos Mottas pointed out that the Cuban Revolution consisted a world-shaking event in the 20th century's history, as long as it was the first socialist revolution in the american continent and in the western hemisphere in general.

Mottas said: "The triumph of the Cuban revolutionaries 60 years ago- like the preceding Great October Socialist Revolution in 1917 in Russia- consists a source of rich assumptions from which we need and must learn things. A first and fundamental assumption is that the exploitative capitalist system, the established order, is not invincible. It can be overthrown. What has been confirmed is the vitality of marxism-leninism, the revolutionary struggle and proletarian internationalism against defeatism and submission to the negative correlation of forces."

"A second - equally important - conclusion is that the overthrow of capitalism cannot, in any case, come through peaceful means and illusions about reforms of capitalism and parliamentary road to socialism". On that point, Nikos Mottas refered to the example of Salvador Allende's "Popular Unity" government in Chile which was brutally overthrown by the Coup d' etat organized by the U.S. and Pinochet.

Before the Cuban Revolution, Mottas said, the country was literally a U.S. colony. "During Batista dictatorship in Cuba, a handful of american monopolies were dominant alongside their local collaborators, parasites, gangsters and the mafia, who were preyed upon the country's wealth. The level of the productive forces were very low. With the decisive economic contribution of the Soviet Union and other socialist states, the revolutionary government of Fidel succeed to change Cuba's face thus creating a state with high-level, accessible to all people, public services of Health, Education, Sports and Culture."

(...) "Today, the support and solidarity towards the Cuban people is not only a matter of the communists, or those who are inspired and fight for the socialist revolution. It is a matter for the working people in every corner of the world. It is a matter for all those who understand the obvious: That it is a historical necessity to intentify the struggle against the rotten capitalist system that generates crises, poverty, wars, misery and refugee flows. After all, history is written by the struggles of the people, the world's oppressed ones".

Nikos Zokas, Vice President of EEDYE, focused especially on the issue of internationalist solidarity: "Since 1959, socialist Cuba received but also gave, wholeheartedly and generously, valuable internationalist help and solidarity to the people who are victims of imperialism, who are struggling to throw off the yoke of exploitation and oppression".

Zokas quoted Fidel Castro's words regarding the international solidarity Cuba received from the world's communists as well as from other democratic and progressive forces, including of course the friendship between Cuba and the Soviet Union.

"The example of the people Cuba during the 60 years of socialist construction" said Nikos Zokas "is perhaps the most valuable thing it has offered to us". And he added: "It showed - even in conditions of harsh imperialist encirclement - what a people can achieve, when he has in his own hands the means of production, the tools that produce the wealth. How he can distribute this wealth for the benefit of the working people and not for sake of a group of exploiters".

(...) Socialist Cuba proved that the people are never alone. That in their struggle they will always have the valuable support of the workers and the people of the whole world".

During the event, the Hellenic-Cuban Association of Friendship and Solidarity of Thessaloniki honored its founder and long-time President Fotis Georgiadis. The Association was founded on Georgiadis' iniative in 1992.

Thanking the Association for this honor, Georgiadis recalled: "I visited Cuba for first time in 1978 (...) Every time I was going there, I was witnessing the revolution getting stronger. That's why I am sure that the revolution in Cuba will not be recessed no matter how much her enemies want it. I shall continue the struggle for Cuba with all my heart, until the end of my life; I regard Cuba my second homeland".