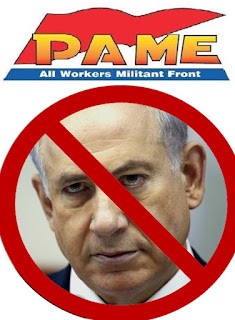 The Greek people have nothing positive to gain from monopoly competitions. The “stability” of the Eastern Mediterranean, the government proclaims, are watered with the blood of Palestinian children.


PAME stands firmly on the side of the struggling Palestinian people to gain its own independent state at the border of ’67 with its capital Jerusalem.

Immediate implementation of the 2015 decision of the Greek Parliament to recognize the Palestinian state.