The 22nd IMCWP kicks off in Havana, Cuba 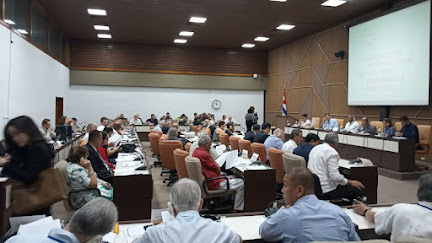 Delegates from 65 countries from all continents have gathered in Havana in order to attend the 22nd International Meeting of Communist and Workers' Parties (IMCWP) which is taking place between 27-29 October at the Havana Convention Palace.

"United we are stronger" is the slogan of the event in which representatives of 82 political forces and 31 delegations headed by their presidents or general secretaries will participate.

The 22nd IMCWP's theme is titled:  “Solidarity with Cuba and all the struggling peoples. United we are stronger in the anti-imperialist struggle, together with social and popular movements, in the face of capitalism and its policies, the threat of fascism and war; in defense of peace, the environment, workers' rights, solidarity and socialism”

Founded in 1998 as an initiative of the Communist Party of Greece (KKE), IMCWP is today the most comprehensive and oldest organization of communist parties that exists. This year's IMCWP is the third that takes place in a Latin American countries, with the previous two being in Brazil (2008) and Ecuador (2016).