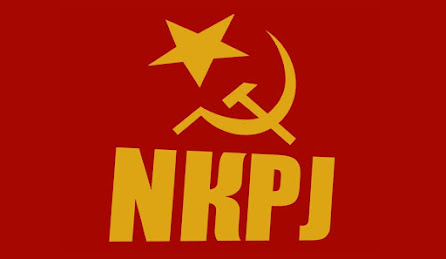 In a statement signed by its General Secretary Aleksandar Banjanac, the New Communist Party of Yugoslavia (NKPJ) denounces the new attack against its headquarter offices by neo-Nazis and calls for solidarity by fellow Communist and Workers' Parties.

"The New Communist Party of Yugoslavia informs you that Neo-Nazis organized a new attack on our Headquarters in Belgrade. They demolished our windows and wrote anti-communist and Neo-nazi slogans. Reactionary forces attacked our Headquarters 5 times last year. In the last few years it has become standard. But the last attack on our Party was the biggest.

In the last few years Neo-Nazis are very active and they constantly destroy a lot of anti-fascist monuments and other symbols of socialism in our country. The NKPJ is the most active Party in our country to defend socialist and anti-fascist symbols. Police and  authorities did not want to do anything. Our Security Services and Police are very familiar with Neo-Nazi groups and they created a lot of them.

Anti-people Government and reactionary forces are disturbed by our political program. Pressure on our Party intensified in the last few years. Attack on our Party exists in the context of huge anti-communist hysteria in Serbia and contradiction in the world. The anti-communist campaign in Serbia goes hand in hand with the offensive against the workers'-people's rights and has been going on for many years. Many films, series, and “science programs” are made to discredit the socialist construction that existed in our country. It is being shown every day. The media is portraying communists and revolutionaries as criminals and adventurers, and on the other hand, they portray collaborators as patriots and  “saviors of the nation”. They want to show that the struggle for social justice is an absurdity, while treason is something to admire. By order of the EU, Serbia brought the law of rehabilitation law and 3000 collaborators during the Second World War were rehabilitated.

Reactionary forces in Serbia with last actions against our Party wanted to scare communists in our country. The members of NKPJ are followers of the partisans, who, led by the communists, defeated fascism and collaborationists who served the Nazi occupiers and slaughtered their own people. Communists are proud of that struggle, because after that glorious victory, a more just world was built, which was tailored to humanity, foresaw a future worth living in, and spread brotherhood and unity among nations, not a policy of hatred and exploitation. NKPJ is sending a warning to the cowards who are hiding behind the Neo - Nazists that communists will not back down because of useless threats.

Communists are people of a special kind who are not afraid of cowardly Neo - Nazis attacks. The Communists will unreservedly and ruthlessly fight to the last breath and drops of blood  for a world without exploitation, racism, fascism, chauvinism, interethnic hatred, and all other reactionary forms of government.

NKPJ asks our sister communist and workers' parties to organize demonstrations in front of  the Serbian Embassy in the next two weeks or to send protest letters against the discrimination of NKPJ to The President of the Republic of Serbia by e-mail: kontakt.predsednik@predsednik.rs

We thank you in advance for your solidarity!

For the New Communist Party of Yugoslavia,