Rishi Sunak, just another enemy of the working class 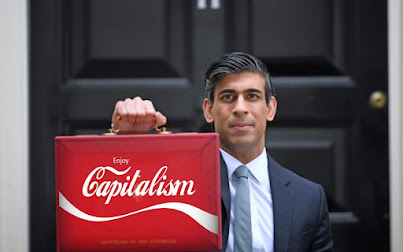 Rishi Sunak, a 42 years-old former Goldman Sachs employee, is the new leader of the British Conservative Party and third Prime Minister of the country in just two months.

The fact that Boris Johnson and Liz Truss are out of 10 Downing Street isn't a reason for celebrations as Sunak is just another political representative of monopoly capitalism and certainly an enemy of the working class.

The new Prime Minister isn't new to politics. He has served as Chief Secretary to the Treasury from 2019 to 2020 and Chancellor of the Exchequer from 2020 to 2022, while he has been a member of the Parliament for Richmond (Yorks) since 2015. Sunak's first speech as PM is characteristics of the policy he will follow. He pledged to place economic stability and confidence at the heart of the government’s agenda, apparently at the expense of the working class who will carry the burden of the energy crisis. He expressed his “gratefulness” to Boris Johnson for “his incredible achievements”, making clear that he is fully committed to the anti-people, anti-worker policy implemented by Tories and the Labour Party during the last decades.

Mr Sunak left no space for misunderstandings about his intentions as Prime Minister. He pledged to “build a government that represents the very best traditions” of his party. These “traditions” of Thatcherism, which are always favorable to the big capital, are a mortal enemy for the working men and women of Britain.

In a statement about the new tenant of 10 Downing Street, the General Secretary of the Young Communist League (YCL) Johnnie Hunter said: “Fresh from getting rid of the shortest lived, and a clear candidate for the most incompetent, prime minister in history, the Tories elect the richest one. The dictatorial power of the markets and a tiny clique of Tory MPs have imposed Rishi Sunak on Britain. This government is weak, deeply unpopular and has no democratic mandate. Now is the time for working people to mobilise, including at the upcoming 5 November demonstration. But this is no time for complacency. The Tories aren’t beaten yet. The Labour Party under Starmer presents no meaningful alternative for the youth and working people. We need a working-class response which meets the demands of the current rising wave of industrial militancy”.

The working men and women of Britain must not be entrapped in the misleading campaign of bourgeois media about Sunak's Indian heritage. The crucial issue is class war and not a fight over culture and identity which is irrelevant to the actual interests of the working people. No one should forget that, back in 2009, Barack Obama became the first African-American President of the United States but the policy of his administration was identical of the imperialist policy implemented by his predecessors.

The Labour Party, a social democratic party that serves the interests of the monopolies, isn't the alternative to Tories. It never was. Only a strong Communist Party, based on marxist-leninist principles, which can lead the struggle of Britain's working class towards the socialist transformation of society is the alternative solution. So that the British people will become masters of their own destiny, owners of their own wealth, in society without exploitation of man by man.