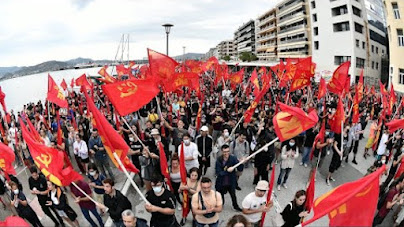 A greeting speech was also delivered by the General Secretary of the CC of the KKE Dimitris Koutsoumbas, while the keynote speaker of the event was the General Secretary of the CC of KNE, Nikos Abatielos. It must noted that the rally was attended by representatives of eight Communist Youths which participate in the 31st Anti-imperialist camp. In the end of the event, the participants sang the “Internationale” thus sending a powerful message of anti-imperialist struggle and proletarian internationalism.

On Friday, 8 July a quadripartite meeting was held at the KKE headquarters Athens, with the heads of the four Parties discussing the contemporary international political situation.

KKE, PCTE, PCM and TKP maintain long-term comradely ties and had recently taken the initiative for the Joint Statement of the Communist and Workers' Parties on the imperialist war in Ukraine which was signed by 42 Communist Parties and 30 Communist Youths from all over the world.