Quadripartite meeting of Communist Parties of Greece, Spain, Mexico and Turkey to be held in Athens 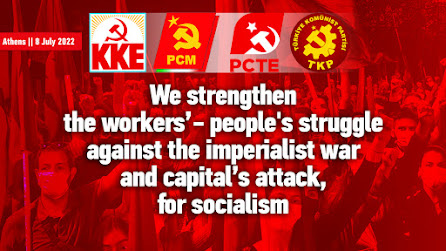 A quadripartite meeting between the Communist Parties of Greece (KKE), Workers of Spain (PCTE), Mexico (PCM) and Turkey (TKP) is going to be held on Friday 8 July in Athens.

The theme of the meeting, which will take place at the KKE Party headquarters in Perissos, is "We strengthen the workers-people's struggle against the imperialist war and capital's attack, for socialism". According to Rizospastis, all the four parties will be represented by their heads. More specifically, the participant comrades are: