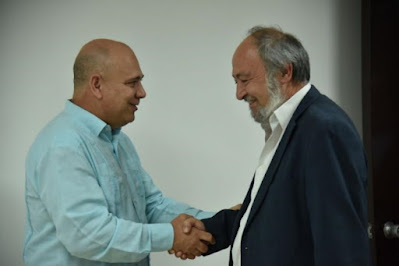 Morales Ojeda expressed his gratitude for the firm position of the KKE in defense of the Revolution, as well as for the persistent struggle against the economic, commercial and financial blockade imposed by the U.S on the island.

“One of the main parties that, from the very beginning, came out to support Cuba's position and reject the interference of the U.S allies, was the Communist Party of Greece”, Morales Ojeda stressed out, referring to the attempted coup that was organized on July 11, 2021 and which was defeated by the immediate mobilization of the Cuban people.

Among the issues of discussions were the political processes that are being developed following the decisions of the 8th Congress of the PCC held in April 2021 and the struggle of the Cuban Government to fulfill three major missions: the struggle for peace, the economic battle and ideological firmness, in the midst of the offensive policy of U.S imperialism against the island.

The two parties also discussed the upcoming 22nd International Meeting of Communist and Workers' Parties (IMCWP) which is going to be held in Havana next October.