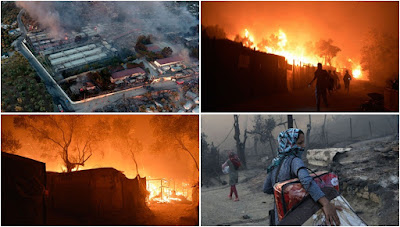 "The government bears heavy responsibilities for the tragic and dangerous situation that has been created in Lesbos for the thousands of refugees and residents, after the disastrous fire in the refugee camp of Moria and must now provide a substantial solution, ensuring the health and the rights of the residents, refugees and migrants.

Despite knowing, for a long time, that the situation in the Moria camp was explosive, due to the large number of the entrapped people who were living under miserable conditions, despite knowing the great dangers for transmission of the pandemic due to the large overcrowding, the government was turning a deaf ear to the demand to close the camp, release all refugees and migrants and take effective protection measures until the end of the pandemic.

Also, it has great responsibities because, in order to satisfy the demands of the big businessmen in the sectors of tourism and transportation, it violated the health protocols thus opening the doors for the spread of the pandemic, first within the residents of Lesvos and lately in the Moria camp.

The government bears great responsibilities because with its policy and with the permanent aim to create a closed “hot spot” (either with Moria’s expansion, or in another part of the island), allowed the creation of humanitarian- health related risks, paving the way for the further implementation of the EU’s reactionary plans to transform the Aegean islands into permanent concentration camps for migrants, through the creation of closed camps.

The KKE demands the immediate beginning of the release of all refugees and migrants from Lesbos. Moria must be closed down and no other refugee camp, closed or open shall be created.

The government must today charter ships and arranges the transportation of the refugees and migrants to the mainland, in compliance with all sanitary protocols, ensuring places with humane conditions of safety and hygiene for their temporary accommodation, until they are given the appropriate documents to travel to the countries of their destination.

The government must carry out diagnostic tests on all refugees and migrants, so that the coronavirus carriers can be quarantined in hotels before leaving the island.

Special care and priority must be given to the organized relocation of families with children, as well as of the hundreds of unaccompanied minors. No delay is justified.

In conditions of pandemic, as well as of escalating tension in the Aegean due to the aggression of the Turkish government which is boosted by NATO, USA and EU in order to proceed with the plans of the Aegean’s co-exploitation, it is proved that the operation of closed or open refugee and migrant concentration camps in the Aegean becomes even more dangerous.

The government is taking new immense responsibilities as long as it will utilize this explosive situation to proceed with the planning and the creation of migrant confinement camps in Lesbos and other islands. The people of Lesbos have the knowledge and the power to prevent it."

PAME: Ashes and oppression in the inhumane time bomb Of Moria

A statement was also issued by the All-Workers Militant Front (PAME), pointing out the following:

"In the last hours we are witnessing another tragic development in the hunting and torture of the persecuted and uprooted refugees and migrants that the EU and Governments have trapped in Greece for years. The notorious concentration camp-hot spot of Moria at Lesbos island was burned to the ground.

This inhuman time bomb planted by the Greek governments exploded in the ashes of Moria. 13,000 people, women and children, stacked, without health and safety measures in the midst of a pandemic. Moria was a health bomb waiting to explode. A “premeditated crime” of the governments that refused to listen to the constant demands of the institutions, the unions, the health committees and the residents for the release of the refugees and the decongestion of the camps.

At the moment when the Government prohibits rallies, demonstrations, and even “gatherings over 9 people” and waves its finger talking about “individual responsibility” in Moria, it had stacked 13,000 people in an area that was intended for 2,000! While provocatively to the need for immediate help and the release of the thousands now homeless refugees, the first reaction of the Government seems to be the sending of new Riot Police forces!

Now it is an IMMEDIATE NEED

–To ensure housing in open and dignified accommodation of asylum seekers, in apartments and hotels for as long as they remain in Greece, ensuring the necessary health and hygiene conditions especially in pandemic conditions.

–To find immediate housing, with the utilization of apartments, closed hotels and buildings that belong to the state.

– Abolish all laws and decisions that violate the rights of refugees and asylum seekers, as provided for in the Geneva Convention.

–Repeal of the Dublin Regulations and the EU-Turkey Agreement.

–To staff the Asylum Service with the necessary staff, to make contract workers permanent, to ensure fast and in accordance with the Geneva Convention asylum procedures for those who wish to stay in Greece, to take hygiene and safety measures for the workers.

–Provide asylum applications in Turkey and move them directly to their countries of destination.

–Take measures of substantial and individualized support for the refugees and integration into the local society.

–Isolate the racist, xenophobic and intolerant acts and attitudes that exploit the problem and seek to disorient the struggle of the Greek people."