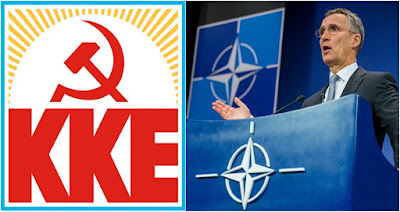 In a statement issued today, the Press Bureau of the CC of the Communist Party of Greece (KKE) comments on the announcement made by NATO Secretary General Jens Stoltenberg that he had brokered a Greek-Turkish agreement to begin 'technical talks' on "establishing deconfliction mechanisms" in the Eastern Mediterranean.

The statement of the KKE is as follows:


"The announcement by the General Secretary of NATO about the existence of an agreement between Greece and Turkey, in order for technical talks to proceed, necessarily means one of two things: either the government has secretly agreed to such a thing or NATO is trying to create a fait accompli and force an outcome, with the knowledge of the government, which is once again exposed. In any case, it is shown that NATO promotes dangerous settlements, using the logic of equal distances and joint management, thus fostering Turkish aggression.

Of course, alongside the ND government, all the parties which side with the EU-NATO are similarly exposed, especially SYRIZA whose stance on the issue essentially exonerates NATO for the dirty role it plays at the expense of the country’s sovereign rights.

It is confirmed, every day, how dangerous for the people is the policy that embroils the country in the US-NATO-EU plans, whose role is connected with the sharpening of Greek-Turkish relations and, more generally, with the competitions in eastern Mediterranean at the expense of the people".