Zhanaozen is the city where police on December 16, 2011 shot an unarmed rally of oil workers who had been on strike for eight months. According to official data, 15 workers were killed, and according to independent trade unions and human rights associations more than 70 people. 37 oil workers were brought to criminal responsibility for participating in the strike, and several thousands of strike participants were dismissed and never reinstated.

From February to April 2019 in Zhanaozen near the city administration began daily meetings of the unemployed, in which Yerzhan Elshibayev took an active part. The protesters, joined by workers from service oil companies, demanded employment opportunities for young people, oil workers who were dismissed during the 2011 strike and raise the minimum wage for low-paid workers.

In order to prevent daily rallies of the unemployed Yerzhan Elshibayev several times  was arrested in March 2019 by the police, but he was released under the pressure of protest actions. Yerzhan Elshibayev was finally jailed on March 26 by the city's investigative court of Zhanaozen. After the verdict of the court, he was placed in the colony of ICH-167/9 in the city of Langer, Turkestan region. 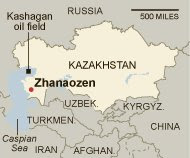 In March and August of this year, he informed his relatives and lawyers of systematic torture of him by the staff of the institution where he is being held. 15 in August, Yerzhan Elshibayev managed to pass a two-minute video to his supporters, in which he gave the names of those employees of the colony who carry out torture, and then in protest sewed his mouth shut.

August 17 in Astana, Shymkent, Zhanaozen and near the colony where Yerzhanis being held Yelshibaev, there were protests by activists of various organizations who demanded bring to justice those who torture him, and release him immediately.

Even earlier in March and June, activists of left-wing organizations and trade unions held an appeal Kazakhstan workers 'Union" Zhanartu " pickets at diplomatic missions Kazakhstan to Moscow, St. Petersburg and Kiev, which demanded the authorities to punish guilty and to review the case of Yerzhan Elchibaev.

We ask you to intervene in this situation and send letters to the address of the presidential administration of Kazakhstan and Ministry of foreign Affairs of Kazakhstan with the request to investigate facts of torture, admission to the convict's relatives and reviewing the case itself.