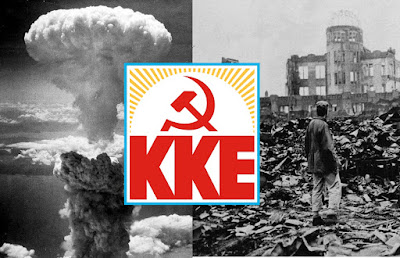 "Seventy-five years have passed since the United States committed one of the most barbaric crimes against humanity – on August 6th in Hiroshima and a few days later, on August 9th in Nagasaki – by dropping for the first time the atomic bomb resulting to hundreds of thousands victims and many more in the following years due to the radioactivity effects.


The clear aim of the U.S. imperialist crime was to intimidate the people, to send a “message” to the USSR and to the rising communist movement, as World War II had in fact already ended and the use of nuclear weapons didn’t play a role in its outcome.

Today, 75 years later, we neither forget this nor the other crimes of the imperialists. Even more when NATO’s doctrine of “first nuclear strike” is in full force, which cancels the non-proliferation agreements and “enriches” its nuclear arsenal. Today, 75 years later, data from the Stockholm International Peace Research includes particularly alarming findings regarding the global nuclear arsenal, as the nine nuclear powers have a total of 13,400 nuclear weapons (SIPRI Yearbook 2020), which they modernize and uncontrollably develop in regions that are fields of intra-imperialist competitions. Such a region is the one of East Mediterranean, the Middle East, where the capitalist states compete for the distribution and control of the markets, the natural, energy resources and the transportation routes.

The Greek governments participate in these criminal plans, keeping in an “operational” level the relevant infrastructure for nuclear weapons’ storage in Araxos. While, additionally, based on the despicable agreement for the U.S. bases, the agreements for the allocation of important infrastructure, ports, shipyards, roads and railways, all of Greece is transformed into a vast U.S-NATO camp and the people becomes target of possible retaliation.

The claims of the New Democracy government, SYRIZA and the other bourgeois parties that this supposedly ensures security, peace and the country’s sovereign rights have gone bankrupt again and again, are dangerous for the people, especially after the latest developments in the Greek-Turkish relations.

The developments require readiness and vigilance, mobilization of forces in the anti-imperialist movement and struggle for:

The imperialist crimes are a strong proof of capitalism’s barbarity. The struggle for peace, friendship and solidarity of the people is inextricably linked with the struggle for the overthrow of the capital’s power, for another path of development of society and economy, with power in the people’s hands."