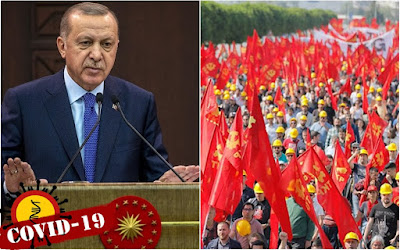 Fundamental rights of healthcare workers have been suspended, while thousands of working men and women (at least 811,000 workers between the ages of 18-20) are forced to work without the basic protection measures.


On the other hand, since the outbreak of the epidemic, the Communist Party of Turkey (TKP) has been calling for the implementation of necessary measures and policies for the protection of the working people's health.

On 29 March 2020, TKP had issued a statement listing the immediate precautions to prevent the spread of the epidemic, calling Erdogan's government to stop production in nonvital sectors and take maximum measures in others.

"Millions of workers are forced to work at risk in the circumstances of a virus outbreak. While the authorities make calls for "stay home", the laborers continue to work to avoid losing their jobs and incomes. Decisions that insistently protect the interests and profits of the capitalists should be abandoned. Regardless of any conditions, the guarantee of the life and health of the working people should be provided", the Communist Party's statement was pointing out.

On April 15th, in a new statement, the Communist Party of Turkey calls on the working people of Turkey to join the ranks of the party to change this social order.

This social order must change, Turkey should become an example!

The epidemic has been the last straw. The existing social order entirely serves the interests of a small minority, and the basic needs, rights, and freedoms of the vast majority of society are neglected. Economic crises, wars have become part of everyday life, and problems such as unemployment and hunger have turned into a nightmare affecting hundreds of millions of people.

There is no good or bad version of this order; it cannot be cured. It is obvious that the US, defined as a superpower, and, France, Germany, England, Italy, which are blessed as European civilizations, have fallen during the last epidemic.

Turkey is also paying the price of not overthrowing this system of exploitation that produces reactionism, darkness, misogyny, and anti-scientism.

No time left. We should take the steps to get rid of this order that threatens humanity as a whole. We should make Turkey an example. TKP aspires to power to establish an egalitarian, fair, free social order. And in this order;
When we throw parasitic exploitative classes off our shoulders, when we use the richness of our beautiful country for the whole society, not for personal interests, we easily realize these ten items. If you want such a country,  join the ranks of the Communist Party of Turkey.