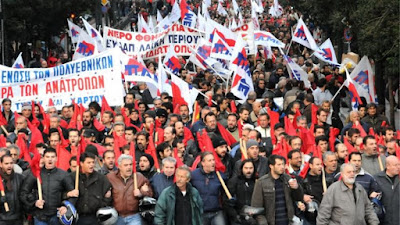 In a first volume called “The Black Bible of Employers during the Pandemic” (here in Greek), PAME has collected hundreds of complaints made by workers’ unions throughout the country, exposing employers’ tactics of layoffs, cuts in wages, pressure and threats to anyone who is seeking protection measures.

Among the numerous cases is the one of the international aviation services company “Swissport” which proceeded to the dismissal of hundreds of contract workers at Athens’ Eleftherios Venizelos airport.

Following the great initiative of USB in Italy, PAME calls workers, doctors, nurses, unions from each country to send their message of solidarity and struggle

With photos or small videos with the slogan and messages to be published and send at international@pamehellas.gr and to the workers and local media of our countries, in social media #staystrong.

The statement of PAME reads:

The developments with Covid-19 are enormous for the people of all countries.

The positions of the EU and governments in each country have undermined public healthcare and endanger the lives of the workers.

They try to secure the profits of the multinationals risking the health of the workers and destroying our rights.

The class unions of Greece, with the Unions of Doctors and Healthcare workers in the front line call for Workers Action Day on April 7.

Under the slogan #staystrong

We Break the Silence!

Healthcare is not a commodity!