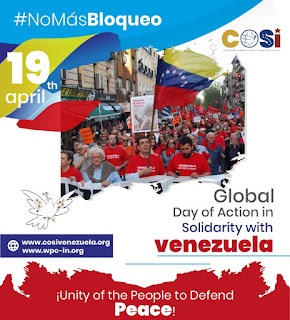 Resolution for the World Day of Action in Solidarity with Venezuela

The below signed movements, organisations and individuals raise our voices in solidarity with the Venezuelan people who today are the victims of a brutal siege and criminal sanctions by imperialist powers.

In this regard, we reiterate our energetic repudiation of any attempt to meddle in the internal affairs of the people of Venezuela, as well as all plans drawn up from imperialist powers which look to force a violent change of government in the country. Included in these plans is a recent manoeuvre from the US government with its so-called "Transition Plan for Venezuela," to which its European allies and some South American governments automatically joined.

This plan seeks to take a new escalatory step of interference and aggressive actions against Venezuela, which, within the conjunctural framework of the global pandemic, aims to justify the means of escalating the blockade and the illegal unilateral sanctions which complicate the effects of the global pandemic for the Venezuelan people.

For this reason, we denounce that maintaining and widening unilateral and extraterritorial coercive measures constitutes a crime against the people of Venezuela. We call for the immediate lifting of the illegal sanctions of the US and European governments against the country. Likewise, we demand the return of financial resources owned by the Bolivarian Republic of Venezuela illegally held in international banks so that they can be used in the country's pressing needs in the fight against COVID-19 and in the developent of the national productive capacity.

Finally, we alert the peoples of the world to the serious threat of military intervention and imperialist war against Venezuela. The US government is looking to prepare a favourable international stage for war in Latin American and the Caribbean. The US Department of Justice's actions against Venezuela's president and senior officials of the Bolivarian government, the unusual increase in the US military presence in Colombia, the joint US-Colombia military exercises near the Venezuelan border and the recent deployment of the US navy in the Caribbean Sea under the pretext of the fight against drug trafficking are constitute clear evidence of US imperialism’s dangerous steps to provoke a war against Venezuela.

We call on the peoples of the world to stop the war-crazed madness of imperialism in Latin America and the Caribbean, and to defend the right of the Venezuelan people to self-determination and peace.

Movements, organizations and individuals who want to express their support and solidarity can send email to cosi.venezuela.cmp@gmail.com.