According to Archpriest Leonid Kalinin, Chair of the Experts’ Council of Art, Architecture and Restoration of the Russian Orthodox Church, Stalin will be included in a mosaic entitled “The Victory Parade”, which was created based on photographs.


“The council considers these images to be absolutely appropriate, reflecting historical truth from which pages cannot be torn out arbitrarily,” said Kalinin in a statement to TASS news agency.

However, he said that some members of the council of the Russian Orthodox Church did not agree with this position. “Not everyone likes it, not all members of the council like it, maybe because their relatives were unjustly persecuted, something that I don’t like either. We cannot tear out this page from history nor did we celebrate the memory of a man who contributed greatly to this Victory, we cannot. Therefore, reluctantly, we did it,” added Archpriest Kalinin.

75 years after the 1945 Great Antifascist Victory, even the most reactionary institutions in capitalist Russia admit the immense contribution of Stalin’s leadership in the outcome of the war. The Russian Orthodox Church, a remnant of tsarist Russia which had always been a bastion of anti-communism, is a characteristic example. 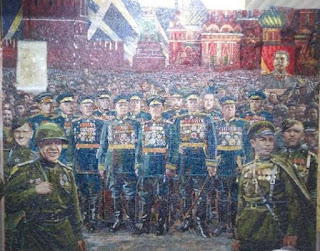 Despite the massive anti-communist, anti-soviet propaganda of the last decades, Joseph Stalin continues to be a popular and revered figure for the Russian people, especially the working class. Numerous surveys conducted during the last years confirm the popularity of Stalin among Russians and the recognition of his role in the Soviet victory in WWII. Both the bourgeois state and the Orthodox Church in Russia cannot ignore this reality, despite their obvious aversion towards Stalin and Socialism.

Except from the great communist leader, the walls of the new Orthodox cathedral dedicated to the Armed Forces will be decorated with the faces of President Vladimir Putin, Defense Minister Sergei Shoigu, Federation Council Speaker Valentina Matviyenko and State Duma Speaker Vyacheslav Volodin as well as security officials like FSB Director Alexander Bortnikov and the head of the Army’s General staff Valery Gerasimov. Russia’s 2014 annexation of Crimea from Ukraine will be also depicted, with one mosaic fragment depicting a group of women with a sign that reads “our Crimea” held aloft behind them.

The 95-meter Armed Forces cathedral is expected to open on May 9th — on the 75th anniversary of the Soviet victory over Nazi Germany in World War II — at a sprawling military-themed park near Moscow.