Joint Statement of Communist and Workers' Parties on the 150th anniversary of the birth of V.I. Lenin 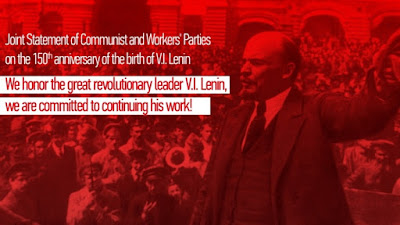 We honor the great revolutionary leader V.I. Lenin, we are committed to continuing his work!

The Communist and Workers' Parties, which co-sign this Joint Statement, would like also in this way to honor a great revolutionary and theorist of scientific socialism, Vladimir Ilyich Lenin, as April 22 marks the 150th anniversary of his birth.

Especially in the current conditions, and while the pandemic of CoVID-19 is spreading, tragically demonstrating the great shortages of health systems in capitalist countries as well as the anti-social and parasitic nature of the capitalist system, in the face of the new crisis, the burdens of which will be again put on the workers' shoulders, the aggressive nature of capitalism and the escalation of imperialist competitions, which pose new dangers to peace and peoples, we feel an even greater need to refer to the historical physiognomy of V.I. Lenin. A personality that dedicated his life to the cause of the working class and other popular strata, to the struggle for the abolition of exploitation and the construction of the socialist society.
We honor V.I. Lenin as the founder of the contemporary working-class party, the "party of a new type", which was firmly separated from the opportunism and apostasy of the old social-democratic parties. Such was the Bolshevik Party, which was at the forefront of the class struggle of the proletariat and the other oppressed strata of Russia. Lenin's party led Russia's working class to victory by overthrowing the exploiting classes and establishing the dictatorship of the proletariat, the workers' and peasants' government, in the service of the interests of the many, the exploited and the oppressed. V.I. Lenin defined and substantiated the leading role of the Communist Party, not only in establishing workers' power but also in constructing socialism.
We honor V.I. Lenin as the theorist who, taking into account the particular reality, further developed the constituent parts of Marxism, i.e. philosophy, political economy, and scientific communism. As an opponent of any opportunistic and revisionist distortion of revolutionary theory and practice, dogmatism, sectarianism, and parliamentary illusions, without denying the intervention through the parliament.
His works, such as "What the friends of the people are and how they fight the Social-Democrats", "The Development of Capitalism in Russia", "What Is to Be Done", "Two Tactics of Social-Democracy in the Democratic Revolution", "Materialism and Empirio-Criticism", "Marxism and Revisionism", "The Collapse of the Second International", "Socialism and War", "On the Slogan for the United States of Europe", "Imperialism, the Highest Stage of Capitalism", "The State and Revolution", "The April Theses", "Left-Wing Communism: An Infantile Disorder", "The Immediate Tasks of the Soviet Government", and "The Great Initiative" are milestones in the propagation and development of Marxism and revolutionary struggle. Lenin's valuable theoretical work is still timely and serves as a beacon for the ideological-political education and action of every new generation of revolutionaries.
We honor V.I. Lenin as the leader of the Great October Socialist Revolution, which about a century ago shook the world. The victorious revolution illuminated the power of the class struggle, the power of the exploited and the oppressed -when they take the case of their interests into their own hands and turn the wheel of history forward- in the direction of social liberation. The October flame led and accelerated the establishment of a number of Communist and revolutionary Workers' parties. Lenin had an insightful strategic ability and skillfully handled alliances, abilities that he devoted to the cause of the socialist revolution.
We honor V.I. Lenin as the leader of the world's first socialist state, which for the first time established workers' power based on new revolutionary institutions, such as the Soviets, sought the economic functioning of society on a new basis, the basis of the satisfaction of contemporary people's needs and the multi-faceted free development of all people, not the profitability of the few. The USSR, the first socialist state in the world, which was realized with the special contribution of V.I. Lenin, brought to the fore new unprecedented economic, social, political, and cultural achievements for the working class and the wider popular strata that had a profound effect on historical progressive developments around the world. It was a support to the peoples in the struggle for socialism and peace.
We honor V.I. Lenin as the great internationalist, the leader who raised the flag of proletarian internationalism against the treacherous attitude of the Second International during the imperialist World War I, opposed bourgeois nationalism and other bourgeois views such as the cosmopolitanism of the capital, and led the establishment of the Third Communist International, which made a major contribution to the international labor and communist movement and today is a basic source for drawing useful lessons from the experience it accumulated through its action. Lenin's positions on colonialism led the Communists to understand the issue of colonies and inspired them to lead the anti-colonial struggles, both in colonial countries and colonies.
We honor V.I. Lenin as the tireless and consistent opponent of the imperialist war, the defender of peoples' struggle for national and social liberation, social justice, peace, and socialism.
The counter-revolution and capitalist restoration cannot conceal the achievements of Socialism. The disasters and injustice we are experiencing, the acute problems and the suffering of the working class, the small-middle strata, the peasantry and the peoples overall caused by capitalist exploitation and oppression, emphasize the necessity and timeliness of socialism all over the world.
The Communist and Workers' Parties denounce the wave of silence as well as the reactionary and anti-communist distortion that has been unleashed around the world by the political forces that serve the interests of the capital against V.I. Lenin to the workers and the youth. We struggle for the continuation of his work, we are committed to continue defending and propagating his legacy and we call on the workers and the people to learn from it.
22/04/2020
SolidNet Parties signing the Joint Statement
Other Parties signing the Joint Statement