Communist Party of Greece (KKE): On the 150th anniversary of the birth of V. I. Lenin 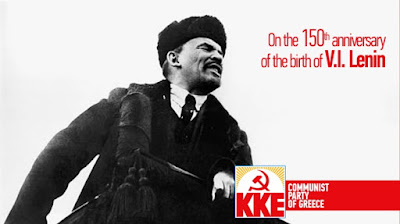 The following is the statement of the Political Bureau of the CC of the Communist Party of Greece (KKE) on the 150th anniversary of the birth of V.I. Lenin.


For more statements and articles by Communist and Workers' Parties please click here.

On the 150th anniversary of the birth of V. I. Lenin

"And looking back from the future on this day,
the first thing seen will be Lenin's figure,
from millennia of slavery blazing the way
to the age of the Commune through want and rigor. "

Exactly 150 years ago, on April 22, 1870, the greatest revolutionary of the world communist movement in the 20th century, Vladimir Ilyich Ulyanov (alias Lenin) was born in the city of Simbirsk situated on the Volga River.

The Central Committee of the KKE honors the leader of the victorious course of the Bolsheviks towards the momentous event of the Great October Socialist Revolution and the first years of the socialist construction.

To this day it continues to be a beacon of revolutionary action for the communists in Greece and all over the world that struggle to overthrow capitalism and construct a higher organization of society, without exploitation of man by man, i.e. socialism-communism.

Lenin, along with Marx and Engels, was one of the founders of the revolutionary theory of the working class, that is to say, Marxism-Leninism.

Guiding the victorious course of the Bolsheviks, he showed that there can be no real revolutionary action without the knowledge of the scientific laws of the class struggle and the objective laws of the evolution of society.

He devoted a lot of time to the study and development of the revolutionary theory of Marx and Engels, even in the most difficult conditions for the labor movement. Throughout his life, he was at the forefront of the struggle against the distortion of Marxism, both by bourgeois ideologues and by various exponents of opportunism.

He put Marx and Engels' words saying that "our teaching is not a doctrine, but a guide to action" in practice,  proving that the development of revolutionary theory is a decisive factor in addressing the contemporary issues of each time brought to the fore by the development of capitalism and the course of the class struggle.

"... give us an organization of revolutionaries and we will overturn Russia!"

Lenin is the founder of the revolutionary party of the working class, whose aim is to "lead the struggle of the working class, not only for better terms for the sale of labor-power, but for the abolition of the social system that compels the propertyless to sell themselves to the rich". 1

The Party of a New Type, as it was called in contrast to the social democratic parties back then, is an organized and disciplined whole that acts based on the Marxist-Leninist theory and aims to overthrow capitalism and establish revolutionary workers' power, known as "dictatorship of the proletariat". It is a revolutionary organization with a unified leadership at a national level, which is also based on the fundamental principle of proletarian internationalism, having deep roots and ties in the working class and joined by the most pioneer workers, who act decisively by participating in one of  its organizations for the common purpose of the revolutionary overthrow, also reinforcing it with material means.

Such was the Bolshevik Party, which went through the fierce battle of the 1905 revolution, withstood the persecution of the tsarist regime and the violence and repression after the defeat of the revolution, served as a beacon for the revolutionary forces in World War I,  victoriously fought the battle of the October Revolution, confronted very skillful bourgeois politicians, who were capable of misleading the masses, forged broad revolutionary ties with the working class, and led the first attempt to construct the socialist-communist society.

Imperialism, the highest stage of capitalism

Lenin's theory of imperialism revealed its economic and political essence, as the highest stage of capitalism, as an era of the formation of the material conditions that necessitate the revolutionary overthrow of capitalism and the construction of the communist mode of production.

He proved that the sharpening of the fundamental contradiction between the social character of production and the capitalist appropriation of its results characterizes all capitalist states, regardless of their position in the international imperialist system.

He sharply criticized both opportunist theories detaching the imperialist military aggressive policy  from the economic characteristics of monopoly capitalism, and theories supporting that capitalist competition is diminished by monopoly domination.

Lenin's theory of imperialism is particularly important for revealing the reactionary imperialist character of unions, such as those of the European states, and the simultaneous tendency of sharpening competition between capitalist states worldwide.

This elaboration was crucial to the formation of the revolutionary strategy, as Lenin himself emphasized: "Unless the economic roots of this phenomenon are understood and its political and social significance is appreciated, not a step can be taken toward the solution of the practical problem of the communist movement and of the impending social revolution.".2

Lenin revealed the reactionary dialectical unity between imperialist war and imperialist peace of the capitalist states and their transnational unions and agreements as a policy for the division of lands, economic spheres, and wealth-producing resources for the pursuit of maximum profit.

He demonstrated that war is imperialist on both sides, regardless of which capitalist state first started the conflict, and that the only way to satisfy the people's demand for peace is to reinforce the struggle against the cause of war, against the system of capitalist exploitation.

With this analysis, the Bolshevik Party managed to form a line of conflict with the bourgeoisie in World War I, in contrast to both the social-chauvinistic expression of opportunism, which called for support for bourgeois war plans, and pacifism, which detached the struggle for peace from the struggle for the overthrow of capitalism.

On the character of the state and the revolution

Of particular importance is Lenin's deeper analysis of the class essence of the state that contributed to the substantiation and realization of the need to conflict with the tsarist regime, but also with the bourgeois "Revolutionary provisional government" formed in February 1917,  to struggle with the opportunist forces that supported it, and within the Soviets (Councils) of the revolted workers, peasants and soldiers. In the vortex of war, Lenin elaborated on the theory that highlighted the need to crush not only the feudal or semi-feudal but also the capitalist state in the 20th century. All revolutionary action from February to October does not allow for any tolerance of old and modern opportunist theories for the gradual reform of the capitalist state into a socialist one.

Lenin's elaboration is a timeless valuable tool for revealing the false essence of dilemmas between a capitalist management of a smaller or larger state intervention, of a liberal or a Keynesian character.

The superiority of socialism - communism

The first attempt to construct socialism in the 20th century showed the superiority of the new system over the barbarity of capitalist exploitation, despite any mistakes and weaknesses during this process.

The abolition of exploitation of man by man, the central planning as a social relation for the distribution of labor force, and the use of socialized means of production with scientifically defined goals of social welfare have been the basis for significant social achievements for several decades. For the first time in history, institutions that ensured the effective participation of workers in the management of aspects of their society were created, taking the masses out of the margins of political and social life. The extensive achievements in health, education, the equality of women, culture, sports, in all areas of social life for all, regardless of age, gender, and ethnicity, were unprecedented. The importance of the above achievements is multiplied if we take into account the economic delay that socialism inherited from pre-revolutionary Russia, but also the fact that the new paved the way for social liberation on unknown paths.

The socialist-communist society continues to emerge as the only pro-people way out of the impasse that workers, the peoples, and especially the youth, are experiencing to this day. Only central planning, on the basis of social ownership of the means of production and workers' power, can provide a response to the acute problems that workers face today. Only the new communist relations of production can utilize the new possibilities of scientific and technological development, digital economy, and the "4th Industrial Revolution" for the benefit of the people's prosperity.

We honor Lenin by strengthening the struggle to overthrow capitalism

The work and revolutionary action of Lenin and the Bolsheviks continue to light the path of the communists' struggle in the current conditions.

In the face of the manifestation of the new international capitalist economic crisis and the exploitation of the pandemic to restrict labor rights, bourgeois democratic freedoms, and even trade union action by bourgeois governments, the rallying and maturation of forces to overthrow the rotten system of capitalist exploitation becomes a more imperative task.

In the face of the serious consequences of the counter-revolutionary overthrows and the sharpening competition between capitalist states and imperialist unions, which increase the risk of a regional or generalized imperialist war, the KKE struggles to strengthen the characteristics that will provide the ability to act as a revolutionary "all-weather" vanguard.

The KKE is at the forefront of this struggle, having formed a contemporary revolutionary strategy and making a constant effort to expand its militant ties with the working class, the popular sections of the middle-class strata of the city and the peasants, and the youth.

It is at the forefront of the struggles of the working class and the popular forces, struggles for the regroupment of the labor movement and the promotion of the Social Alliance, the joint struggle of all those who have an objective interest in the struggle against capitalists, monopolies, the state, and their alliances.

It daily studies the new phenomena brought to the fore by the class struggle and the movement of the capitalist economy and international competitions between capitalist states in order to always maintain its ability to highlight the limits of the capitalist system, expanding the anti-capitalist consciousness to the workers.

The struggle conducted under current conditions for the final abolition of the class-exploitative society and the construction of the socialist-communist society is a practical tribute to the great communist revolutionary V. I. Lenin, the October Revolution, and its objectives.