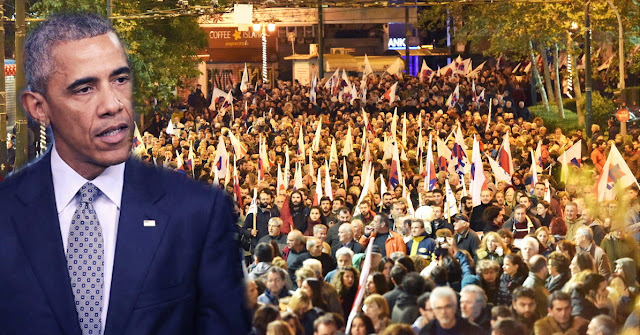 Under the slogans "Neither land nor water to the murderers of the people", "Get NATO out of the Aegean" and “The imperialists re-divide the world, they draw the borders with the blood of the peoples” thousands of people, workers, young men and women, participated in a massive rally in central Athens against the visit of U.S. President Barack Obama. The protesters condemn Obama's visit and the Greek government's participation in the Euroatlantic imperialist plans.

It must be noted that the labour-peoples movement defied the provocative and authoritarian decision by the SYRIZA government to ban demonstrations in the Greek capital during Obama's stay in Athens.

The General Secretary of the Communist Party of Greece (KKE) Dimitris Koutsoumbas participated in the demonstration and made the following statement to reporters:

"We deliver a militant 'welcome' to the president of the USA; of an imperialist state which, among other things, especially during the last years with the capitalist economic crisis, leads the "crows" of IMF which bleed the Greek people. A state which causes military coup d' etats, which causes interventions, imperialist wars, from Ukraine to Eastern Mediterranean, the Middle East, Northern Africa, Asia, Latin America. A state which murders civilians in these countries, which creates the large wave of refugee flows, which afflict and uproot thousands, millions of people from their homes, thus afflicting these people, the Greek people, the Aegean islands.

Against this provocation, as well as for the past of the United States and the present, the KKE, the class labour union movement, the Greek people as a whole and the pro-peace powers contend a thunderous NO against the USA, NATO, the "alliances of wolves" and their wars. We denounce the government of the- supposed- "first time Left" of SYRIZA-ANEL which tried, with all possible ways, to impose cemetery silence today in Athens. We respond in a militant way, we are here, at the front line, we demonstrate, exactly because we don't surrender, we don't compromise, we give neither land nor water to the murderers of the people".


PHOTOS FROM THE DEMONSTRATION (Source: 902.gr).

Speaking in Athens, Elpida Pantelaki, General Secretary of EEDYE, denounced this ban, imposed by the SYRIZA-ANEL government, and stressed that «This despicable decision of the government follows in the footsteps of the previous governments of ND and PASOK, which the current government used to denounce when it was in opposition. This decision confirms that working class and popular mobilizations against the imperialist plans of NATO and the EU and that dispute capitalist barbarity itself have no place in their bourgeois democracy. Their democracy is restricted to the freedom that the business groups have to exploit the peoples, for their governments constantly to draw up new anti-people laws and so that the peoples become the cannon fodder of the imperialists. Today’s rally is the answer of the labour and people's movement of Attica. We do not accept such bans. We do not submit to the anti-people political line of the government, capital, the imperialists. We demonstrate, we struggle, and we demand that our country have no participation in the imperialist plans and wars."
In reference to the real goals of Obama's visit, E.Pantelaki stressed:"The goals of the visit of the US President to Greece are:
The outgoing US President is promoting all this, congratulating the Greek governments the SYRIZA-ANEL government, because at the same time when they condemn the workers to poverty, they maintain very levels of military spending for the needs of NATO."
The representative of EEDYE also mentioned the goals of the people's movement:
And she noted:" As difficult as the conditions of struggle are today, as negative as the correlation of forces is, our people have great strength in their hands and this will be liberated to the extent that they understand their just cause and interests. The prospect of disengagement from NATO and the EU with the people masters in our own land must become a reality."
The representative of EEDYE denounced the recent decision of the Turkish authorities to ban the Peace Association of Turkey and expressed the solidarity of EEDYE with the Turkish comrades and demanded the annulment of the ban.
It should be noted that on the 17th of November, the anniversary of the Polytechnic uprising, new anti-imperialist demonstrations will be held in Athens and other Greek cities.