Despotic and despicable decision by the SYRIZA government forbids demonstrations during Obama visit in Athens! 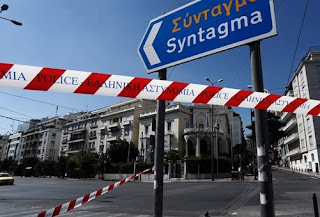 With a despicable decision which reminds authoritarian establishments, the Greek Police have banned demonstrations in Athens on Tuesday and Wednesday as part of security preparations for a visit to the Greek capital by outgoing US President Barack Obama.

The despotic decision by the SYRIZA-ANEL coalition government was slammed by the Communist Party of Greece (KKE) which issued the following statement / Source: 902.gr, Translation: In Defense of Communism.

"With a despicable and despotic decision by the Police, the SYRIZA-ANEL government essentialy forbids any demonstration against the visit of the U.S. President Barack Obama, thus following the policy of the previous New Democracy-PASOK governments which SYRIZA, being in the opposition then, was denouncing.


Once more it is proved that the slogans about "democracy" are empty, when the governments implement reactionary, antipeople policies, either they concern the labour-popular rights or the participation of our country in dangerous war planms, such as the ones of USA-NATO-EU, which are evolving in our region. After all, for all these the President of the USA comes to Greece.

The Greek people and the youth must condemn and answer to the governmental authoritarianism and the policy which dictates him, by participating in a mass way in the demonstration of EEDYE, PAME and other organisations of the labour-popular movement and the youth, on Tuesday 15 November, at 6.30pm in Omonia Square."